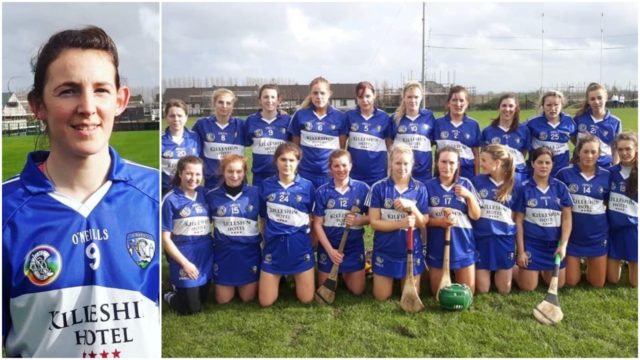 Moments before the Laois Camogie team ran out on the field to face Kilkenny in their first league game of the season on Sunday, manager Donie Franks announced his captain for the season.

O’Moore’s defender Alison McEvoy will lead the side this season and she describes the accolade as a ‘privilege and an honour’.

Speaking to LaoisToday, Alison, who succeeds Camross’ Aisling Burke, said she hadn’t much time to think about it on Sunday but now that 24 hours have passed, she is absolutely delighted.

She said: “We were about to run out on the field when Donie made the announcement so I hadn’t got much time to think about it really.

“But it is certainly a huge privilege and an honour to captain your county. So I am really looking forward to the year ahead.”

26-year-old McEvoy played camogie for Derrylamogue NS and Rosenallis as a youngster.

She is one of three McEvoy sisters playing for county champions O’Moore’s camogie club – along with Jenny and Emma.

A veterinary nurse by trade, Alison is a dual star who is part of the six in a row county champions Sarsfields side and the Laois Ladies side who won the intermediate Leinster final last year.

Alison has decided to concentrate solely on camogie at county level this year.

She said: “Both managers contacted me at the start of the year but I’ve been playing both sports for Laois for the last two years and I felt I needed to pick one.

“To be honest I’ve always enjoyed playing camogie more than football so that is what I chose.

“We have a very exciting group of players this year. We have a number of minors in with us and they will get valuable experience playing here.”

Laois were defeated by Kilkenny on Sunday and Alison feels their performance shows they have plenty of scope for improvement.

She said: “To be honest, the scoreline didn’t really reflect the nature of the game.

“We have done a lot of fitness work so far and we know we have a lot to build upon as the season progresses.”

Laois face Derry away on Sunday in their next game.