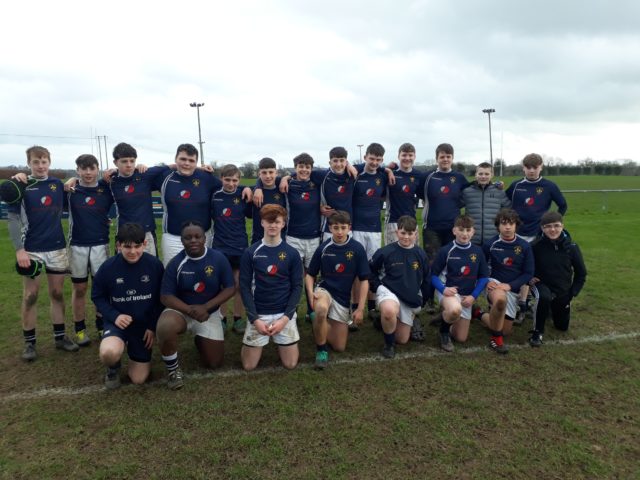 Carlow 14 Portlaoise 32
U-15 Rugby Cup Round 1
Portlaoise RFC U15s travelled to Carlow at the weekend for the opening round of the cup and after a hard fought match they progressed to the quarter final stage.
The first ten minutes was end to end with neither team getting a foothold in the match. When scrum half Marc Bracken put in a good kick down the line to gain the territorial advantage, Portlaoise were not going to leave without a score.
After the subsequent lineout, they hit it up for a couple of phases and then released the ball out the line to Mikie Daly who crossed the whitewash with ease for his first try.
Portlaoise failed to secure the kick off and Carlow attacked immediately. Their centre put a high kick into the 22 and followed up to catch the bouncing ball and run under the posts, leaving the score 7 5 to the home side.
This score gave Carlow plenty of confidence, and they attacked with purpose, but just when they looked like scoring again, the ball was knocked on and Portlaoise regained possession.
Portlaoise ran from their own line and after several phases and some strong running from Brian Keane and Sean Ward, they worked their way up to the Carlow 22. Another carry by Ward and offload to the supporting Daragh Phelan and the Mountrath man crashed over the line to give his side the lead again.
The second half saw Carlow attack again and after some sloppy defence by Portlaoise, the home side regained the lead after their wing forward went over. This left the score 14 10 to Carlow. Portlaoise battled back and after several carries worked their way up to the Carlow line. Ward picked again and drove over the line to get his name on the scoreboard. Matthew Coonan converted to leave the score 14 17.
The away side started to gain control, and after Mikie Daly got the ball on the half way, he stormed up the sideline past two defenders to get his second try of the game. It wasn’t long before he had his hat trick, and after Dara Phelan turned over the ball on the half way, the Portlaoise forwards moved it up the field.
Daly picked from the back of the ruck and dived over the line, 14 27 to Portlaoise. From a scrum on the half way, Portlaoise again put the ball through the hands out to Daly on the wing. He was stopped just short of the line but he offloaded and after an excellent pick up off the ground by James Kidd, the full back was over in the corner, full time 14 32 to Portlaoise.
This win gives them a home quarter final tie with Birr in three weeks. Next week it is back to the league with an away match v Mullingar.
Squad: Callen Dunne, Dara Phelan, Bobo Lawal, Darragh Davies, Glen Connolly, Daragh Phelan, Cian Coffey, Sean Ward, Marc Bracken, Mitch Fitzpatrick, Mikie Daly, Paul Flanagan, Brian Keane, Matthew Coonan, James Kidd, Billy Kerry, Eoin O’Brien McCormack, Declan Cox, Luke Greene.
SEE ALSO – Business forced to close in Abbeyleix following extensive fire