The Laois senior footballers are back in the hunt for promotion from Division 3 after a comeback victory against Longford in O’Moore Park.

Laois had won their previous two competitive meetings against Longford but victory looked unlikely as they trailed by a point after playing with the wind in the first half.

But manager John Sugrue made some changes and Laois improved their performance levels remarkably to win their third game of the season and move to second in the table.

The St Brigid’s man has been a bit quiet by his own very high standards so far in 2019 but he roared to life tonight with an incredible display.

He kicked a great point in the first half and then became a towering presence in midfield in the second as Laois strangled Longford in that sector of the pitch – denying them primary possession.

The Bull was at his brilliant best and hopefully he can really kick on from here.

2 – Brody save and another clean sheet

And he was heavily involved in the turning point in the game 20 minutes from the end. Longford forward Darragh Doherty got in one-on-one with Brody but he managed to pull off a stunning save that lifted Laois and the crowd.

If that goal had gone in, it is difficult to see how Laois would have gone on to win.

Manager Sugrue made his first change at half time by bringing in Trevor Collins for Sean Byrne and moving Marty Scully higher up the field.

This worked a treat as both players complemented each other well with their pace. Sean O’Flynn had a similar impact when he came on and, like Collins, really put his hand up for a starting spot.

Eoin Lowry and Colm Murphy were also introduced with the former kicking a vital point that gave Laois a two point cushion to hold onto until the end of the game.

It wasn’t the greatest night for football at all and both sides struggled playing with the wind.

Laois had it in the first half and went in trailing by a point at half time – with most fans left thinking another defeat was on the cards.

But Longford similarly struggled to play with the wind in the second half and only managed four points.

5 – Tonne up for Ross Munnelly

The Arles-Kilcruise forward was immense, he kicked three points from play and in the 75th minute of the game, he was still running and carrying the ball for his team.

We will never, ever see the likes of him again.

Aside from the weather, Laois were very flat and sloppy in the first half and this inconsistency is stopping them from winning games in a more convincing manner.

They kicked six balls short into the Longford keeper’s hands in the first half and also misplaced a number of passes in attacking areas that resulted in scores on the counter attack for Longford.

With games against Offaly and Carlow to come, Laois need to find two consistent performances for 70 minutes in order to get the wins that could see them reach another league final.

7 – Return of Timmons and Carroll

For the first time this year, Graiguecullen’s Mark Timmons and Portlaoise’s Benny Carroll played in a game for Laois.

Timmons’ return saw him link up with Gareth Dillon and Stephen Attride to reunite the full back line that helped Laois to the Leinster final last year and he was flawless again.

Carroll operated at centre forward and helped to pull the strings in the second half as he kept Laois patient on the ball when trying to break down a stubborn Longford defence. Two valuable additions for Sugrue and co.

7 – Other results and league table

There were big results in the other two games that took place tonight.

Louth went into tonight top of the table but they were beaten 1-10 to 0-12 by Carlow. Meanwhile, Down are now clear at the summit after they defeated Offaly by 2-12 to 0-10. 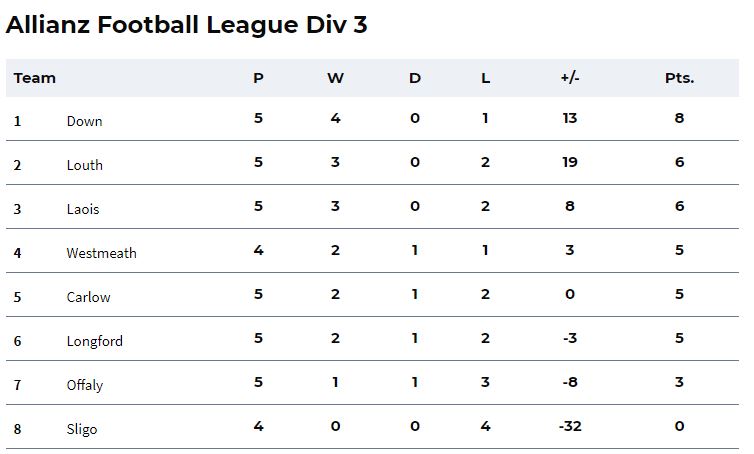 Laois have a week off now before they travel to Tullamore on March 16 to take on Offaly in their second last game.

A week later, they play Carlow in O’Moore Park.