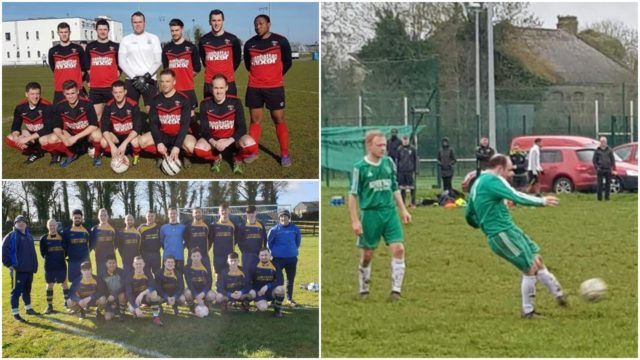 The number of Laois teams in CCFL soccer action today may have been down – but there was still a couple of hugely important fixtures.

We have reports on the wins for Abbeyleix and Stradbally as well as all of the weekend CCFL soccer results from around the region.

The magic of the cup was alive and well in Fr Breen Park this morning as 2018 Runners-Up Rosenallis were defeated by fellow Laois side Abbeyleix Athletic.

This game pitted Division 4 against Division 1 so the final score is a big upset but came as a result of a superb display from the Abbeyleix lads. From tip off in horrible conditions both teams went at it and the ref had to be on his game to keep things under control.

Abbeyleix had the break through within the first ten minutes, Joe Bergin racing on to a superb through ball and followed up with an excellent shot leaving the keeper little chance of saving, Abbeyleix were well on top but had to be alive to the aerial threat from a big Rosenallis team who always looked dangerous from set pieces.

Dean Byrne, Eoghan Fennely,Oisin Carroll and David Brennan performed well under the pressure. Abbeyleix doubled their lead soon after, again Joe Bergin was on the end of a defence splitting pass and he drove an up-stoppable shot to the net leaving Abbeyleix two nil up with barely 25 mins on the clock.

As the half wore on Rosenallis started to come back into the game and again were a threat from set pieces, a superb point blank save from Abbeyleix keeper Andrew Bonham and a goal line clearance from Killian Burke ensured the score stayed the same coming into the break.

Rosenallis also had a goal disallowed for offside just before half time, a decision which they certainly did not agree with.

The rain continued to fall into the second half and conditions were poor but both teams were still giving their all.

Rosenallis had a period of domination but they failed to take advantage while Abbeyleix always looked dangerous going forward with Terry Lawless and Aaron Caroll dominating in the middle using wingers Leon Bradish, Killian Burke and later Dan Coffey to stretch the Rosenallis back line it was inevitable that the third goal would come. This time Jamie Coffey finished a great move to the net there was no coming back from there.

A brilliant all round performance means Abbeyleix progress to the next round where Stradbally Town await.

Man of the match was Joe Bergin who continues his fantastic form in front of goal, bringing his tally to seven in the last three games.

Towerhill gained revenge for their recent cup defeat on penalties at the hands of Clonaslee as they ran out emphatic winners this morning.

A hat-trick from former Stradbally Town man Darlington Overseth did the trick for Towerhill on the day.

He began the scored early in the game, with twenty seconds on the clock to be exact, by taking advantage of a Clonaslee defensive mix-up.

Clonaslee regrouped and were on top after that though. Some good work in the box from Gerry Carroll left Jo Jo Dunne with a simple tap in for his first ever club goal.

Towerhill, however, retook the lead before half time as Martin Hillard kept his composure to finish well. Richie Downey pulled off two good saves from free kicks in first half too for the home side.

Clonaslee again were the more dangerous team at the start of the second half and were unlucky not to get back on level terms after Jack Malone rounded the keeper but his pass across the box was blocked.

Towerhill scored twice in the final 15 minutes. Overseth was the man of the moment as his two goals sealed a memorable win.

Stradbally travelled to St. Carthages this morning knowing a result would guarantee them promotion and came home with all three points after a tough game.

Both teams have to be given a lot of credit for the standard of football that was played in terrible weather conditions. The First half was a very even affair with Stradbally’s best chance falling to Padraig Fitzpatrick who unfortuently for Stradbally put his effort wide of the post. St. Carthages had a few efforts for themselves but in truth never really troubled Jack Larkin in Stradbally’s goal. 0-0 at the break.

On 55 minutes a long ball forward from St.Carthages was mis-judged by the Stradbally defence and left Jack Larkin one on one with their striker who finished well from 4 yards out.

It was a wake up call for Stradbally who moved up another gear after this set back and got their rewards after a little bit of a scrabble in the box from a free ended with veteran Conor Brady was in the right place at the right time to slot it home from inside the box.

Stradbally had their tails up now and were pushing for the winner and it came with about fifteen minutes to go from Jake Byrne who never gave up the chase, and he got his reward with a close range finish.

Stradbally could have added one or two more goals after this but wasted chances and luckily for them it didn’t come back to haunt the men in Green and White and they held on for a 2-1 victory for promotion to Division 1 and also kept their slight chance of catching leaders Gentex still alive.

Mountmellick United suffered defeat away to Athlone side Willow Park this afternoon.

Mountmellick started well and sharp. They pressed hard and created a chance with Mark Grennan going one-on-one with the home keeper but his shot was saved.

After 20 minutes, Willow took control of the game and went 1-0 ahead. From here on it was a real battle. The weather and pitch were a huge factor.

The second half continued in a similar vein – a constant back and forth with Willow creating better chances.

A dubious offside call led to Willow getting the second goal on 75 minutes. They saw out the game strongly getting the third with a couple of minutes to go.

A well organised Willow deserved the win, but it will be an interesting battle again when they come to Mountmellicks Conor Davis Park in a couple of weeks. Noteable performances from John F Watchorne and Brandon Cooper.