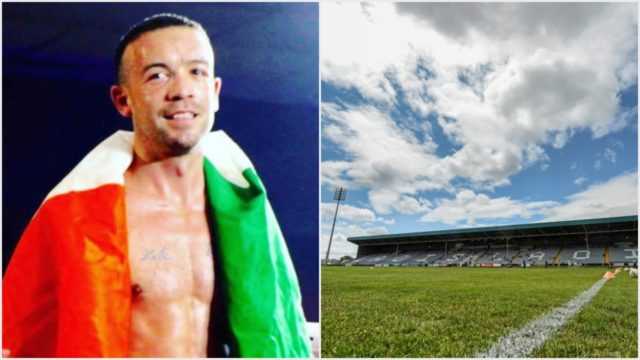 The Portlaoise fighter made the revelation of his desire to have a bout in his home town on Midland 103 at the weekend.

And Laois Gaa have confirmed to LaoisToday that they would be willing to facilitate any such fight.

A spokesperson said: “There would be no issue pending the dates and the contract.

“It would come down to Central Council approval but hopefully this would be granted.”

Speaking to Brian Moss on the Inside Line, TJ Doheny revealed how he would like to fight in Portlaoise one day to ‘give back to the town where he honed his skills’.

He said: “It used to be just a little fantasy thought in the head back in the day but the ways things are developing its fast becoming a reality and now it really is a number one goal.

“Especially the reaction I get off from the people in Portlaosie. I know they’ll come out in droves. I can’t even go to Tesco anymore.

“That is my end goal now. I need to keep winning and get my fights that I have out of the way but my end goal is to fight in Portlaoise and give back to the town where I’ve honed my skills and I think they deserve that.

“And I would really like to see if we could get an all Irish title fight at O’Moore Park what more could you want.”

TJ Doheny is facing a unification bout against Danny Roman on April 26 live on Sky Sports.

You can listen to the full interview below: