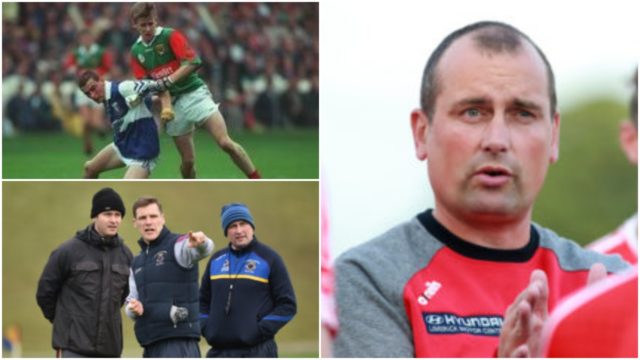 Ahead of Laois’s quarter-final clash against Limerick this weekend, we spoke to the former Laois All Ireland minor football winner is now leading Limerick’s underage scene as intercounty minor hurling manager.

Diarmuid Mullins was an All Ireland minor football winner with Laois in 1996 and 1997 as well as a dual player with Portlaoise – winning senior hurling and football medals with the Town.

He was also a part of the Portlaoise panel that reached All Ireland club final in 2005.

Diarmuid, the nephew of former Dublin great Brian Mullins, was previously a coach with the Limerick footballers.

Mullins has worked closely with former Clare manager Tony Considine in a number of high profile club roles – including Kilmallock in Limerick and Nenagh Eire Og in Limerick. He has also been involved in coaching Mary I and University of Limerick Sigerson Cup teams.

In addition to this, he also has a successful coaching career with  schools soccer and rugby teams in Crescent Comprehensive where he is deputy principal.

Mullins helped Kilmallock to win two senior championships and was involved in the Mungret side which won the Limerick intermediate championship in 2016, the club he transferred to from Portlaoise.

The Portlaoise native spoke to us about the rising tide of hurling support in Limerick, his various coaching roles and Laois hurling as he sees it.

He first embarked on life in the Treaty county in 1997, where he studied teaching in Mary I until 2001. In his early 20s, Diarmuid was also involved in coaching the Laois U14 hurling team.

“I suppose you could say I retired early in 2009/2010 and I was interested in coaching.

“I had a good experience with coaches during my playing days and I thought it was important to give something back.”

Speaking on All-Ireland champions Limerick’s stream of success from underage up, Mullins puts it down to the underage structures they have in place, in addition to a talented crop of players.

This, he says, stems from starting up the Limerick Hurling Academy in 2011.

“Joe McKenna is instrumental to the successful setup of the underage academy in Limerick. As are Pat Donnelly and Mikey Kiely.

“There are no other trainings or matches for clubs held on Saturdays, so the players can commit themselves fully to the academy setup.”

This academy is developed with a holistic approach and cast it’s net far and wide in search of young hurlers to join.

It has produced many players from traditional non-hurling strongholds like Kildimo-Pallaskenry (Kyle Hayes), Feohanagh-Castlemahon (Seamus Flanagan) and Askeaton-Ballysteen (William O’Meara).

Mullins credits the similar work implemented by Pat Critchley with underage structures in Laois and spoke about his native county’s hurling form.

“It’s great that Laois have gotten here. Over the years, Laois has had a number of talented players, it’s just about reaching that breakthrough.

“Now as traditional hurling counties build on their structures it can be harder for Laois and other counties to keep up with them,” said Mullins.

When asked about whether he would be attending the game on Saturday night, he said that he is attending his nephew’s confirmation in Portlaoise on Saturday – and hopefully might make it over see a bit of the game.

We’re sure you might find the Portlaoise native somewhere in O’Moore Park as Laois take on Limerick in the Allianz league quarter-final on Saturday, March 9 at 7pm.