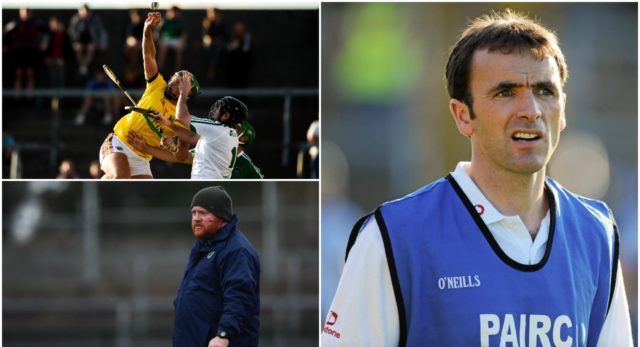 While there is plenty of national league action building up inside of county as the Laois senior hurlers take on Limerick, three Laois men are preparing for three different league finals of their own.

Mountrath man Paddy Carroll plys his trade in goals for the Westmeath senior hurling team, as they face Kerry in the division 2A final this weekend.

Carroll has not appeared in the starting lineup for Westmeath last two games due to injury and is not naming on the provisional starting 15 for this Sunday, however he is hotly tipped to make an appearance on Joe Quaid’s side.

McEvoy took over the Derry hurlers for 2019 and has plenty of managerial experience under his belt.

A former Laois hurler and Dublin U-21 manager, McEvoy played with Laois for a spell in the early 2000s and was part of the Clough-Ballacolla panel that won their first county title in 2009.

He then managed the Dublin U-21 team to the 2011 All Ireland final, and he also served as a selector under Anthony Daly when the Dubs defeated Kilkenny in the Division 1 final.

In 2012 he took over as Clough-Ballacolla manager mid-season and guided them to a county final where they were defeated by Rathdowney-Errill after a replay.

Derry and Wicklow meet in this division 2B final as two sides with little separating them on top of the league. They have both won four out of five matches – with Derry losing out to Wicklow by six points in their last meeting in March.

Before taking over the intercounty role, he was in charge of Borris-Kilcotton’s U-21s alongside the aforementioned Moore this year and was a selector on the Laois U-21 team under Cheddar Plunkett in the past.

Comerford transferred to Portumna in Galway in 2015, where he has since represented them at both Junior and Senior hurling grades.

Speaking to GAA.ie‘s Cian O’Connell, Comerford spoke of how he hopes his Roscommon side can ‘reap the rewards’.

“There definitely is satisfaction when stuff you are working on is coming off in games, especially when you have a group of lads working hard. They are reaping the rewards.”

“Obviously there is nothing won by any means yet, but when they perform it gives them an extra little kick and they really start believing in what you are trying to do,” he told O’Connell.

It hasn’t been easy for Comerford and the Roscommon hurlers, however. They have to compete with strong football ties in the county, as well as rugby. Comerford spoke about the high numbers of players opting out of the intercounty scene.

“There is a huge turnover in players in Roscommon for whatever reason, I can’t really put my finger on it. They won the Rackard in ’15 and I probably only have three or four lads that were on that panel now.

“At the start of a new season you list out your short term goals and one for us was to get to the League Final,” he told GAA.ie.

All three finals involving Westmeath, Derry and Roscommon are on Sunday, March 10 at 2pm.

Westmeath are up against Kerry in the Allianz hurling league 2A final in Cusack Park, Ennis.

Derry face Wicklow in the Allianz Hurling League 2B final in Inniskeen, Monaghan.

Roscommon play off against Armagh in their division 3A final in Páirc Tailteann, Meath.