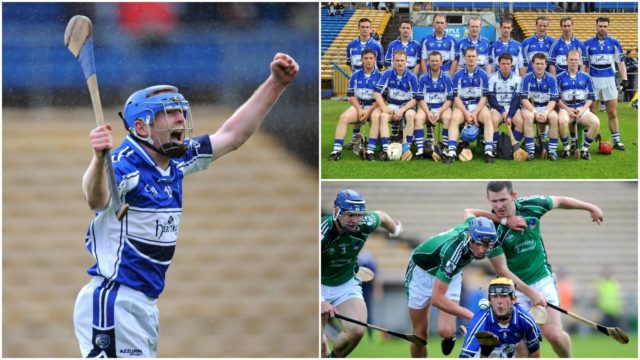 It was on this summer’s day that the 2009 crop of Laois senior hurlers displayed some of the best hurling they’ve played in years – and even received a standing ovation from Cork and Galway supporters after the game.

As the momentum gathered, the crowd looked on in shock as Tommy Fitzgerald and Eoin Costelloe fired over two points in quick succession on the back of a Willie Hyland free.

Laois dominated in the air, with their half-back line claiming five Limerick puckouts in the first five minutes.

Centre-back Mick McEvoy earned a well-deserved mention as man of the match, as he won numerous balls sent into him and used the ball intelligently over the course of the game.

Costelloe secured the first goal as he fired in his rebounding shot towards Limerick keeper Brian Murray. Hyland added to further frees to leave Laois eight points ahead of the so far scoreless Limerick after 10 minutes.

Paudie McNamara stepped up for Limerick in the corner, hitting four unanswered points before Eamon Jackman and Mick McEvoy struck two vital scores for Laois leaving them six ahead.

Limerick slowly pulled themselves into the game, with McNamara, Paul Browne and an Andrew O’Shaughnessy free clawing back the deficit to leave just a goal between the sides – 1-9 to nine points at the interval.

A fear crept in that this would be the last of the scoring exploits for Laois, but as Costelloe and Hyland pointed for Laois, the pressure pushed back onto Limerick.

Limerick showed their experience in this fervent game to reduce the deficit back to one through James Ryan, O’Shaughnessy, Donnacha Sheehan and a wonderful Paul Browne shot at the crossbar.

Towards the end of the game, Laois faltered as Limerick took over. As O’Shaughnessy added two late scores for Limerick, it signaled the end of Laois’s All-Ireland campaign.

Although their campaign may have ended, the legacy of that game lives on, with this Laois performance being long from forgotten.