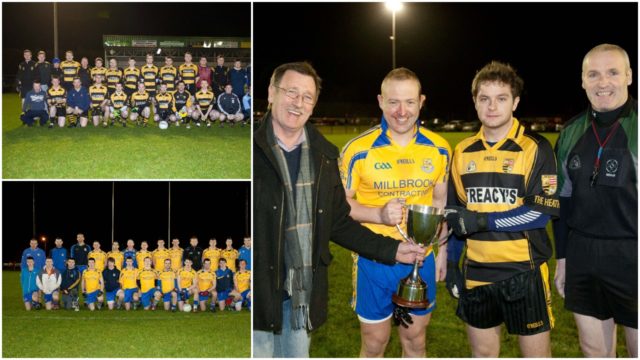 The Heath produced a dominant display of attacking football on the day to clinch the first ever Kelly Cup title , comfortably seeing off the threat of St Josephs by 14 points in Crettyard.

The margin of victory was just reward for a display which had St Josephs in trouble from the opening minutes.

The Heath were more sharper and clinical than there opponents, as they defended strongly and created scoring opportunities almost every time they crossed the half way line with Cathal Whelan really catching the eye with a personal haul of 2-6.

The challenge for St Josephs on the day was to see if they could bring in the successful
U-21s to the senior team.

Unfortunately Josephs on the day they were only competitive in fleeting spells as they struggled to contain a rampant Heath attack in the first half.

The alarm bells were ringing from the start as The Heath scored 5 points in the opening 10 minutes, it already looked like the contest was close to over.

St Josephs kicked into life at that stage with James Doyle pointing a free before he then took advantage of some hesitant defending in The Heath full back line to fist home from close range, after goalkeeper James Farrell failed to hold the ball.

That goal put just one point between the teams, but it lasted barely a minute as The Heath hit back ruthlessly in their next attack.

Chris Bergin picked up the ball 40 yards out, and cut through a gap in the St Josephs defence to race clear on goal and coolly slot the ball into the bottom corner.

James Doyle again hit back for St Josephs with a free, but the rest of the half belonged to The Heath as they put the game beyond doubt.

The half ended and The Heath already looked assured of victory, leading 2-9 to 1-2 and on top in almost every position across the field.

With seven minutes remaining, The Heath confirmed, if any confirmation was needed, that the game was over with their third goal.

A long ball towards full-forward Seamus Mulhare broke to Cathal Whelan and his shot from 14 yards out found the back of the net despite substitute keeper Dermot Kelly getting his fingertips to it.

Doyle rounded off St Josephs scoring for the night with another free, his third of the game.