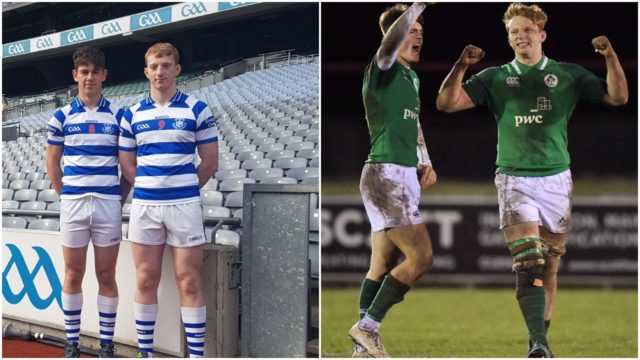 The Ireland U-20 rugby team have already wrapped up the Six Nations championship with one game to spare – and they will go for the Grand Slam and Triple Crown this weekend.

While the senior team have struggled somewhat, the U-20s have flown through their four games to date with wins over England, France, Scotland and Italy.

All that stands in their way of completing the set is Wales – who have two wins and two defeats from their four games so far.

One of Ireland’s key men throughout the competition is former Knockbeg student Martin Moloney.

Hailing from just outside Athy and a member of the St Laurence’s GAA club in Kildare, Moloney was joint captain of the Knockbeg senior football team in 2018.

He has started every game of this Six Nations run as a flanker and is set to do so again this weekend.

Moloney is the third member of Athy Rugby Club to feature at U-20 level for Ireland in recent years.

Moloney follows in the footsteps of Joey Carbery who has been capped at senior level and Jeremy Loughman, who like Carbery is now with Munster.

Interestingly both Carbery and Loughman moved from secondary school in Athy to Blackrock for their latter two years but Moloney didn’t go to a rugby playing school at all and completed his Leaving Cert in Knockbeg last year.

Moloney achieved fantastic results too and was awarded with a scholarship to UCD.

Another recent Knockbeg rugby player of note was Tom Daly who is now contracted with Leinster but is on-loan with Connacht.

Also on the U-20 squad are three recent past pupils of Cistercian Roscrea – props Michael Mline, Josh Wycherly and Ryan Lomas.

Ireland are looking for their first U-20 Grand Slam since 2007 – a team that included future internationals like Keith Earls, Luke Fitzgerald, Ian Keatley and Felix Jones.

Ireland take on Wales on Friday night in Eirias Stadium, Colwyn Bay, Wales at 7.05pm. The game will be shown live on RTE 2.