This is extremely complicated so please bear with us.

The Laois senior footballers play their last game in Division 3 this weekend but even if they win it, they most likely will not know whether or not they will be promoted.

However, if that exact combination of results does not occur, the final will have to be pushed back as the game between Westmeath and Louth which was postponed on Saturday due to an unplayable pitch will come back into focus.

The CCC have decided to push ahead with the fixture list for this weekend as it stands, meaning that that tie will only be played if it is needed.

The same situation occurred in Division 4 last year where Laois’s game with Antrim was postponed but Laois and Carlow were already mathematically assured of being in the league final so the Antrim tie was never refixed.

According to the Irish Independent, the Louth v Westmeath game was not refixed on St Patrick’s Day as the Lake County had a number of gardai on duty at parades.

While Bank Holiday Monday was also ruled out as Louth said they had too many players unavailable with work commitments.

The whole saga puts Laois in a very unfortunate position as if they do beat Carlow and Westmeath get something from the Longford game while Louth fail to beat Down – Louth will go into that Westmeath game with nothing to play for as they can neither be promoted or relegated while Westmeath would know a win would see them promoted.

And as for the Carlow game itself, there is an extra dimension too as a Laois win, coupled with an Offaly win over Sligo, would see Turlough O’Brien’s men relegated back to Division 4.

The only thing that we can be certain of is that it will go down to the wire on Sunday – and we can’t wait. 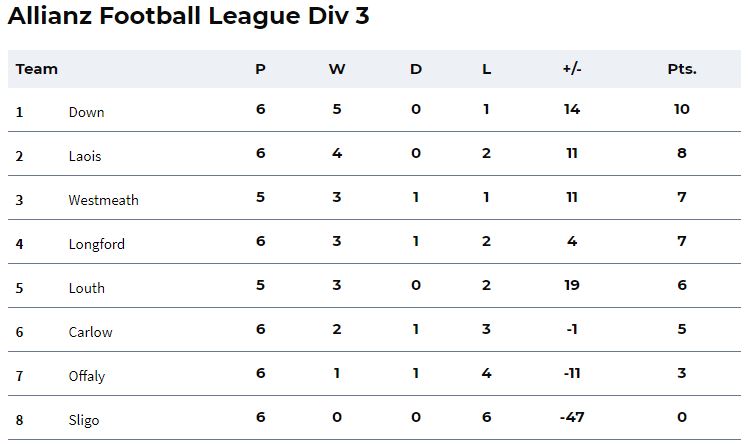