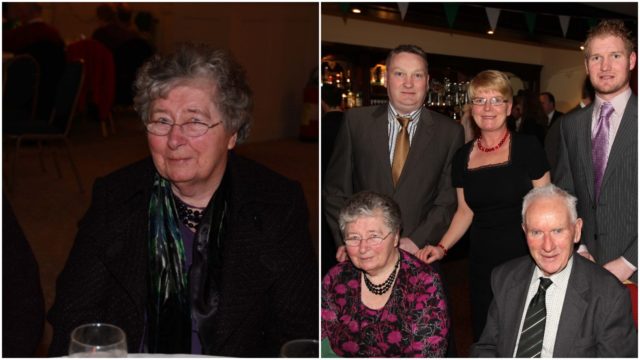 The death has taken place of Mrs Mary Daly from Portlaoise. She was 92 years of age.

Mrs Daly is the mother of Fianna Fail Cllr Catherine Fitzgerald. As a mark of respect to Catherine and her family the monthly meeting of the Portlaoise Municipal District this morning was adjourned once news of Mrs Daly’s passing emerged. Cllr Fitzgerald is the chairperson of the municipal area.

Her Council colleagues paid tributes to Mrs Daly before adjourning their meeting for two weeks.

Mrs Daly was described as a formidable lady and a lovely woman. She had worked as a psychiatric nurse in St Fintan’s Hospital as did her late husband Tom.

They reared their family in Marian Avenue in Portlaoise. Both Mrs Daly and her husband were actively involved in the Laois Mental Health Association and were organisers over the years of the popular whist drives held on its behalf.

Vice-Chairman of the District, Cllr Willie Aird led the tributes and  proposed the adjournment. He extended sincere sympathy to the family.

This sentiments were seconded and echoed by Cllr Noel Tuohy who also grew up in the Marian Avenue neighbourhood. Mrs Daly was he said a lovely woman who will be missed.

Cllr Caroline Dwane-Stanley said Mrs Daly was wll known and liked and would be missed at the bingo.

Cllr Mary Sweeney described Mary Daly as a formidable lady who would be a big loss to her family and all those who knew her.

Cllr John Joe Fennelly said she was a real lady and extended his sincere sympathies to all her family and friends.

Cllr Pauline Maidgan said their thoughts and prayers are with their colleague Catherine at this difficult time. She said that Mrs Daly had spent her final days in the excellent care of the Ballard Lodge Nursing Home, where she was much loved by all the staff who thought highly of her and enjoyed her company as she was such a breath of fresh air.

Director of Services Mr Michael Rainey, Mr Wes Wilkinson and Kim Kinsella offered their sympathy and condolences on behalf of the management of Laois County Council.

Mrs Daly of Marian Avenue was predeceased by her husband Tom and her daughter, Maureen.

She is survived by her daughters Catherine, Anne and Paula and her son Kieran, who won a number of senior football titles with Portlaoise. He works in the psychiatric services in the UK.