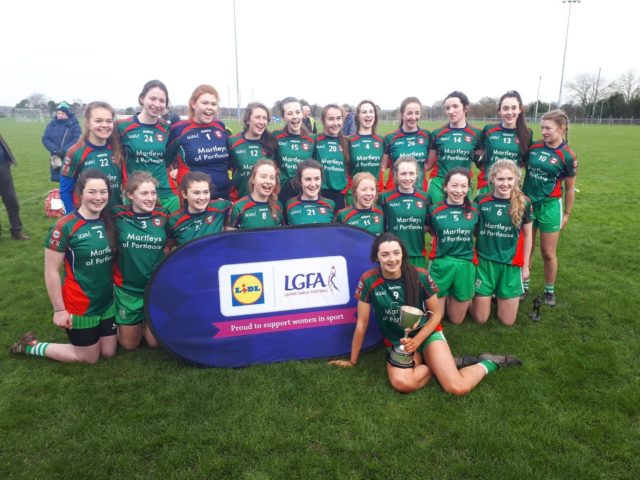 Scoil Chriost Rí saw their junior All-Ireland dreams come to an end today as Clare Galway’s second half dominance and 4-8 scoring within the 30 minutes saw them earn a coveted final place.

Colaiste Bhlair Chláir’s Kate Slevin gave a masterclass in centre-forward, kicking 3-7 and setting up plenty more as much of the play revolved around her.

The sides began the game exchanging points with Ciara Hegarty giving Colaiste Bhaile Chlair the lead only for Lisa Keane to reply for Scoil Chriost Ri.

But the Connacht champions dominated the next ten minutes of the game to go five points clear.

Kate Slevin and Ciara Hegarty landed further points before they combined for the game’s opening goal with Slevin collecting a fine pass from Hegarty before planting the ball in the net.

Scoil Chriost Ri responded well to this set back with frees from Niamh Conroy and Orla Knowles but they were rocked again after 20 minutes with Colaiste Bhaile Chlair’s second goal.

Kate Slevin was the architect this time as she set up Sara Cogley who raced through before slipping the ball into the net.

Scoil Chriost Ri hit back with Niamh Conroy were desperately unlucky not to get a goal when Anna Lalor saw her shot come back off the crossbar with the game’s next attack – but the goal they craved came soon after.

A fine solo run from Niamh Conroy saw her lay off the ball to Orla Hennessey and she made no mistake from close range to leave three between them.

Colaiste Bhaile Chlair finished the half strongly though with points from Hannah Walsh and Kate Slevin to lead 2-5 to 1-3 at the break.

The Galway school were first out of the blocks after the interval, with Eabha O’Riordain grabbing a goal after Slevin hit the post with her attempt.

Lisa Keane kicked a point in return after superb runs from her and Sarah Larkin up the field. Hennessy added to this with a point of her own but Colaiste Bhaile Chair took over, kicking 1-2 through a Brennan point and 1-1 from Slevin before SCR scored again.

Aoibhe O’Brien defended well for the Portlaoise side while Conroy and Keane added a free and a point each.

However Slevin earned another 1-2 for herself without response to make it 5-10 to 1-8 with eight minutes left.

Keane tapped over the final point of the game but by then Colaiste Bhaile Chlair added a Ciara Hegarty goal and three points from Slevin, Laura Scanlon and Hannah Walsh to walk away deserving winners on the day.

Scoil Chriost Rí will get their chance in a final place however as their seniors are out against Loreto Clonmel in the senior ‘A’ championship next weekend.