The Laois senior footballers are promoted to Division 2 of the National Football League following today’s win over Carlow.

Laois had beaten their neighbours in all three of their meetings last year and they maintained their winning streak with a three point win today.

This is Laois’s fifth victory of the season and moves them to top of the table ahead of the final game of the league between Louth and Westmeath next Saturday – the winners of which Laois will face in the final.

1 – Man of the Match: Paul Cahillane

With last week’s man of the match Benny Carroll ruled out before throw in through injury, it was the turn of another Portlaoise man to shine.

Paul Cahillane was simply outstanding from start to finish. When Laois needed to be composed on the ball, he sprayed it around brilliantly. He chipped in with a few scores too and chased back after Carlow attackers right to the very end. He just edges out Brendan Quigley who we will come to later.

Almost two years after the Timahoe man last pulled on a Laois jersey, he returned to the fold today and was absolutely immense.

Manager Sugrue went for Quigley on the half hour mark and he strangled control of the midfield area from Brendan Murphy from there on. Missed ten minutes of the second half after picking up a black card but his level of high fielding was out of this world.

For a player who’s last appearance for Laois came in a All-Ireland Qualifier defeat to Clare in 2017, it was a remarkable performance and what an addition to the Laois squad he is.

3 – Strength and Depth of the Laois panel

Before the game, Laois lost three players that had been named to start. Colm Begley was out with a groin injury, John O’Loughlin was still recovering from the head injury sustained against Offaly while man of the match from that game Benny Carroll also missed out.

In their place came Kevin Meaney, Marty Scully and Denis Booth. The fact that Laois were able to absorb the loss of players like the trio mentioned above and still go on to win, show the depth that currently exists in John Sugrue’s panel. This can only be a good thing for the county going forward.

4 – How Laois have been promoted to Division 2

Laois are top of Division 3 tonight following their 1-15 to 1-12 win over Carlow and regardless of what happens in the re-fixed Louth v Westmeath game, Laois will be in the final.

here are the permutations

Down, because of their weaker scoring difference cannot make the final. Click here for a clearer explanation.

5 – The Phantom Point that could have been important

The game finished in crazy circumstances. Carlow went in search of the goal that would keep them up and stop Laois from getting promotion.

However, with just minutes remaining, Evan O’Carroll kicked a legitimate point that wasn’t spotted by the referee or his umpires. Carlow keeper Robert Sansom punched O’Carroll’s effort away through the back of his own net but the ball had already gone over the bar. Amazingly it was missed by the umpires and had Laois not gone on to get one more point, they would be level on points difference with Down which could have caused a number of problems pending the result of the refixed Louth v Westmeath game.

6 – The Importance of Ross Munnelly’s free

Laois manager John Sugrue made a big call in injury time as he substituted Evan O’Carroll just as Laois had been awarded a free that would put them three points clear.

Neither Sugrue, O’Carroll or Ross Munnelly would have known how significant at the time this free was going to be but in his 102nd league appearance for Laois, Ross was ice-cool as usual.

After the aforementioned phantom point, this score was so important in the end.

This was undoubtedly the biggest crowd that have attended a Laois league game this season – and they were very vocal which certainly added to what was an exciting game.

A number of people were caught out by the size of the attendance and large queues were visible outside O’Moore Park at the ticket boots as the ball was thrown in.

Hopefully even more will turn out to support the lads in the league final.

Six of Laois’s seven opponents for next season are now known. Roscommon and Cavan have been relegated from Division 1 today while Laois and either Louth or Westmeath will be promoted.

They will join Kildare, Clare, Armagh and Fermanagh in the new Division next season.

9 – Other results and league table

Louth defeated Down by 0-10 to 1-6 to give themselves a chance at promotion while Westmeath got the better of Longford by 1-14 to 1-10 to do likewise.

Meanwhile, Offaly’s 1-11 to 1-10 win over Sligo sees them stay up for another year while Carlow and Sligo are relegated. 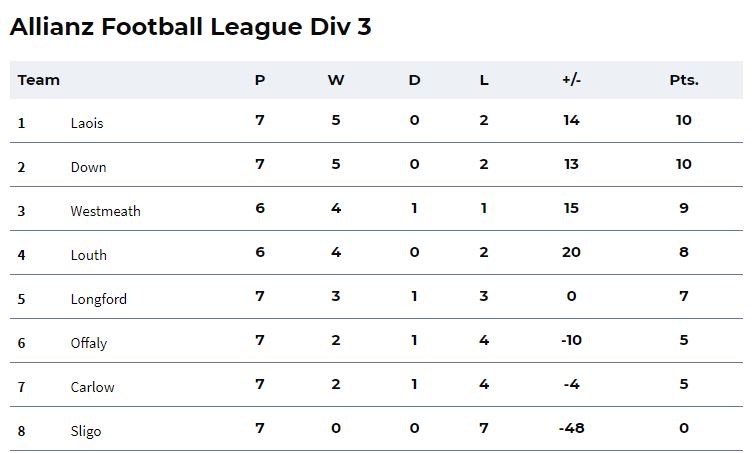 Well, that is in the hands of the GAA Gods. Louth and Westmeath will meet in their rescheduled game on Saturday in Drogheda.

That, presumably, means that the Division 3 league final will take place the following weekend? But that will have to be confirmed.