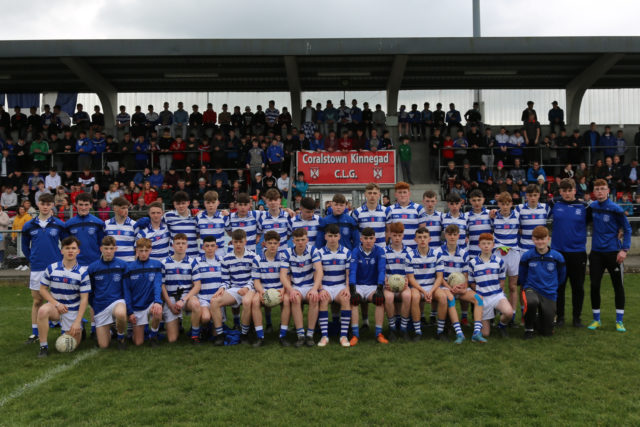 Knockbeg’s All-Ireland football dreams have ended in controversial circumstances in Kinnegad this afternoon.

Referee Liam Devenney’s decision to show Knockbeg’s Oisin Hooney a second yellow card just before half time was the turning point in the game.

Hooney’s second yellow was the correct decision but it was the first that was completely wrong.

Newry’s Aaron Norris threw a number of punches in Hooney’s direction off the ball and although the St Joseph’s player didn’t retaliate, on consultation with the linesman, referee Devenney showed both players yellow cards – something that would be very costly for Knockbeg.

Aside from the red card, Knockbeg had chances to win the game and they will rue a number of wides in the second half plus a missed penalty.

Knockbeg had the wind in the first half and started really well with Fionn Bergin, Oisin Hooney and Ciaran Burke helping them into an early lead.

Newry got off the mark through Adam Crimmons and got their first goal at the midpoint of the half via Oran McCafferty.

Knockbeg responded well to that with Bergin, Hooney and Colin Dunne pointing before they were rocked again with the concession of a second goal from Adam Crimmons from the penalty spot.

Oisin Byrne hit back with a free and although Hooney was sent off, Knockbeg took a 0-9 to 2-1 lead at the break.

Newry had the breeze now and an extra man and they quickly leveled the game.

Midfielder Padraig Clancy then grabbed their third goal to make it 3-5 to 0-9 with 15 minutes to play.

Knockbeg were then awarded a penalty with Fionn Bergin’s shot was foot-blocked but Colin Dunne’s effort went wide.

Knockbeg’s first score of the second half came from Oisin Byrne after 48 minutes but Padraig Clancy kept Newry four ahead with what would be their final score of the game.

Knockbeg kept going right to the end as they always do and three Fionn Bergin frees narrowed the gap to one in the fourth minute of injury time.

But time ran out on this brave team and Newry were crowned champions.