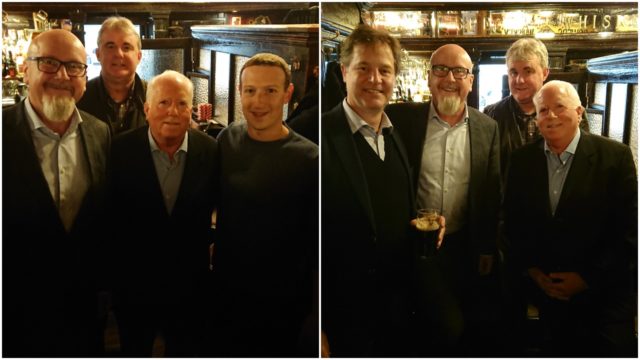 He was the most sought after man in Dublin yesterday, but only one journalist in the country got to have a one-to-one chat with Facebook founder, Mark Zuckerberg.

LaoisToday columnist and writer, John Whelan says it all happened by chance and that he just happened to be in the right place and the right time.

“I knew Mark Zuckerberg was in town to meet a select number of TDs to discuss online controls and the need to regulate social media, but I never thought for a second that I’d end up having a pint and a chat with him,” says Whelan, totally unfazed by the experience, but rather seeing the funny side of his fortuitous encounter with one of the world’s wealthiest and most influential businessmen.

“A lot of our friends are incredulous that it all happened by accident but we had no inside track or knowledge and it was completely a chance encounter,” explains John.

“I had a number of meetings in Dublin yesterday and arranged to catch up with a couple of colleagues after work in Doheny & Nesbitts on Baggot Street.

“Noel D Walsh is a broadcaster and media trainer and Richard Moore who now runs his own PR firm I know since back in the Irish Press and afterwards when he was a Special Advisor to Minister Dermot Ahern.

“There was the usual after-work bustle and buzz in Doheny’s, it’s a popular spot, owned by Offaly man Tom Mangan who is originally from Daingean.

“It’s a favourite haunt over the years of political and media types, frequented by David Hanley, Eamon Dunphy, Michael McDowell, David Davin-Power,Brian Cowen and the likes of Pat Rabbitte over the years, as it’s not far from the Merrion Gate in Leinster House.

“At about 7 o’ clock yesterday a group of about fifteen or so arrived in together but there is nothing unusual about that in this busy location with Toners and Donoghues across the road.

“The next thing we spotted Nick Clegg the former leader of the Lib Dems in Britain and we twigged there was something afoot. Right beside us in the snug was Mark Zuckerberg and members of his team ordering up pints and some food.

“It was gas really because it was all casual, Guinness, burgers and chips and everyone relaxed, Mark Zuckerberg himself in his trademark jumper, no fuss and no one paying a blind bit of heed. 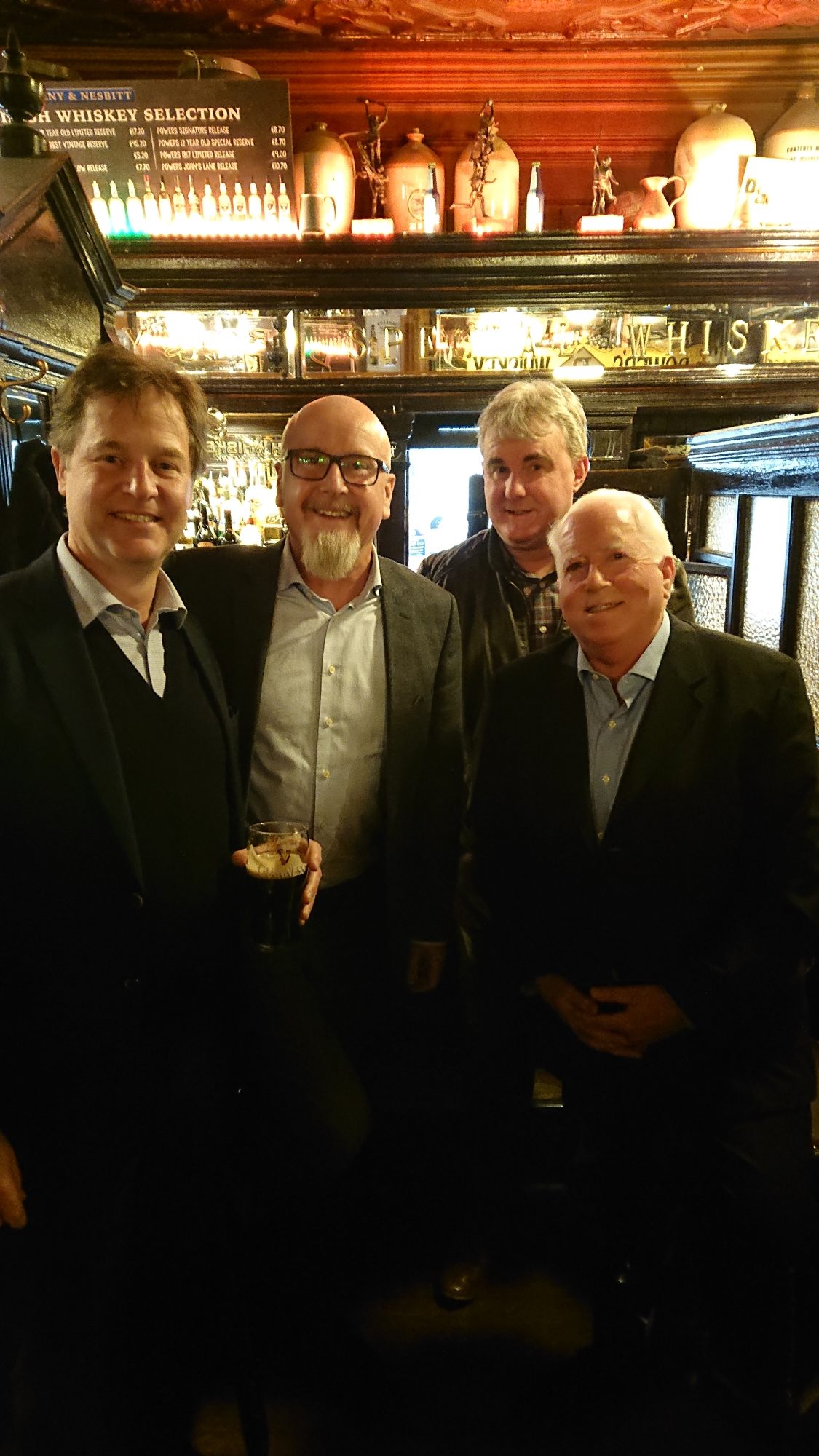 “Meanwhile less than one hundred metres around the corner minutes earlier there was a media scrum outside the Merrion Hotel as journalists and photographers jostled for position, but Mark Zuckerberg only gave a few brief answers and declined all interview requests following his private meetings with a few TDs and here he was next door sipping pints.

“We got chatting to his staff including his advisor Nick Clegg and we hit it off. He was interested that I was a former Senator and politician as he himself had obviously been Deputy Prime Minister in the UK and he is now Vice-President for Global Affairs and Communications at Facebook.

“We had a great chat about politics and Brexit in particular. He is entirely disgusted with the whole Brexit fiasco and was especially bothered by its impact on young people and future generations in the UK.

“He then went to Mark Zuckerberg and brought him over to us, did the introductions and hence the photo, which naturally went straight up on to Facebook, but not until after they had departed as we wanted to be fair to them as they were taking a break and grabbing some refreshments,” the LaoisToday scribe outlines how it came about that he was the only reporter in Dublin to get the opportunity to chat to the Facebook founder.

“All the journalists in the city were looking for the scoop and here we were having a few scoops with Mark Zuckerberg and Nick Clegg, you couldn’t make it up,” says John. 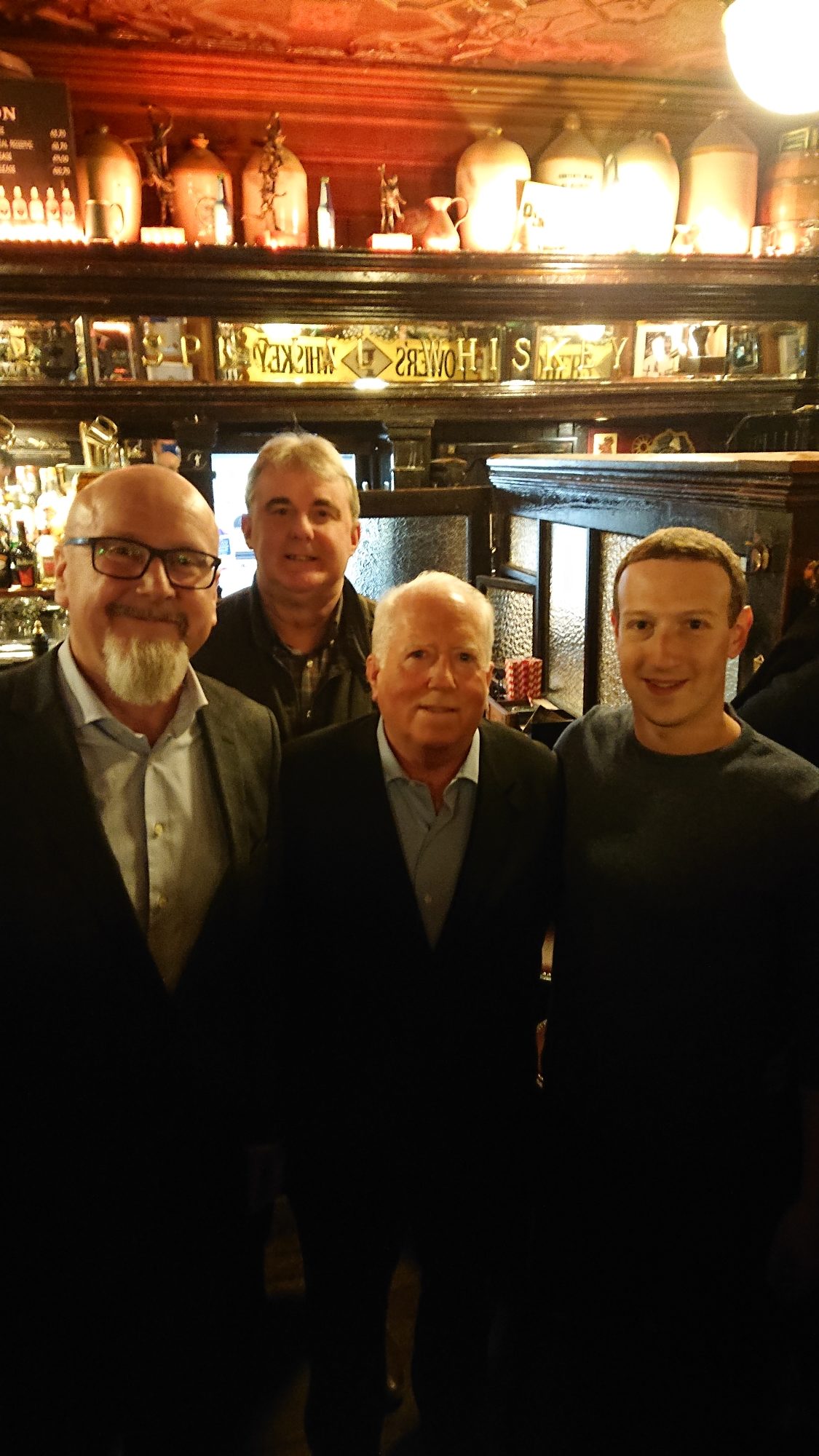 “To be honest I’d say he’s quite a shy and reserved type of person. He was courteous and down to earth but I personally found it easier to have a bit of banter with Nick Clegg, perhaps we have more in common, as algorithms wouldn’t be my strong suit as media and politics is more my thing.

“Nevertheless, it was interesting to meet Mark Zuckerberg over a burger and a beer for after-work pints. It was an unexpected encounter and made for an eventful and fun evening, when every other journalist in town was trying to find him for an interview and here he was in plain sight.

“And we even got the photo to prove it,” says John, adding, “that’s a story for the grandchildren and the next book.”