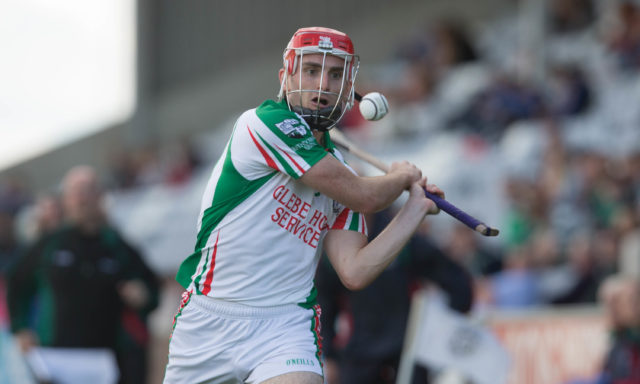 Rathdowney-Errill had a comprehensive victory over The Harps tonight in this 48 point meeting down in Errill. However the scoreboard dioes not reflect how nip and tuck the game was for periods, especially in the first half.

There was only six points between the sides at the end of the opening half, but Rathdowney-Errill pushed on through Paddy Purcell, Ross King and Paddy McCane when play resumed, while The Harps faded away somewhat.

The senior ‘A’ side have faced some of the stiffest competition in division 1, with each of the four rounds beig against senior sides.

Tadgh Dowling pushed Rathdowney-Errill into an early lead – just after 30 seconds from the ball being thrown-in.

The Harps’ freetaker Michael Lanigan remained as calm and collected over placed balls as ever today – contributing eight points in total, with one from play.

Ross King and Langian traded scores before Rathdowney-Errill took a hold of the game, with wing-back Eric Killeen dominating his zone while King, McGinley and Kavanagh all converted for the home side.

As The Harps played a sweeper, Rathdowey-Errill men outnumbered the full-forward line of Maher and Langian and were able to work out the ball into the capable hands of Purcell and King.

Langian and Brophy raised the white flag for The Harps to make it level after 15 minutes but Brandon McGinley rattled the net shortly after this, making the most of a handpass sent in to him by James Ryan.

Purcell, King, and Kavanagh on frees all contributed to Rathdowney-Errill’s 1-12 at the break, while Langian frees and Padraig Delaney working his way through the crowds left The Harps with nine points at half time.

Rathdowney-Errill were particularly impressive under opposing puckouts – winning numerous ball in the air.

One of these displays saw Paddy Purcell set up Paddy McCane for his first of three, Purcell contributing a point of his own before this.

Eoin Clancy reaped the rewards of his hard work with a goal to bring The Harps five points on 1-9 within Rathdowney-Errill but they would only raise the white flag twice after this as the home side put down a marker.

Kavanagh put away two frees in front of the posts before King went on a magnificent solo run through the defence to earn himself one of his three points today.

Purcell slotted over two while McGinley added a second goal to his tally to make it Rathdowney-Errill 2-19 The Harps 1-9 after 50 minutes.

Substitute Shane Dollard set down his marker with two points of his own while the skillful McCane made the most of his opportunities in front of the posts twice.

Purcell would land the third goal for R/E while points from Comerford and Lanigan brought The Harps up to 1-11 after 60 minutes.