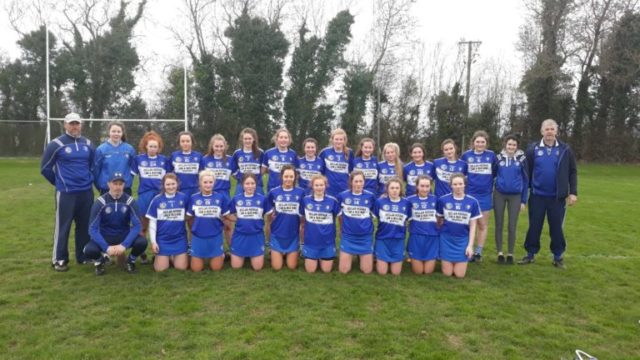 The Laois minor camogie team are taking another thrilling step towards a possible place in the All-Ireland ‘B’ final as they face off with Derry in the semi-final this weekend.

So far Robert Jones’s side have played three games in group one, winning all three to top the group and earn themselves in a spot in the semi-final against the second place group two side, Derry.

The Laois minor camogie panel got their All-Ireland campaign off to an exquisite start over Roscommon at the beginning of the league.

Their next encounter was a thriller of the highest order, as they clawed out a victory over favourites Limerick.

Manager Jones was full of praise for the work his side have put in so far, but made it clear that Derry will provide stiff opposition for the squad.

“We started training in December and they’re after putting in 100 percent so far. They’ve done everything we’ve asked of them.

The minor side, like many camogie teams, have many players involved in different age groups and different sports, but Jones says while this can be tough, schedules can be worked out with ‘a bit of common sense’.

“We have seven U16s with us and a few girls playing intermediate too.”

The Laois U16s are out the day before the minor All-Ireland semi-final in an U16 Leinster semi-final, and tight schedules are a struggle they all know too well.

“It can be hard but in fairness Laetitia Lyons who manages the U16s has been very good, a bit of common sense goes a long way,” said Jones.

The other semi-final sees Westmeath play off against Limerick on Sunday, April 21.