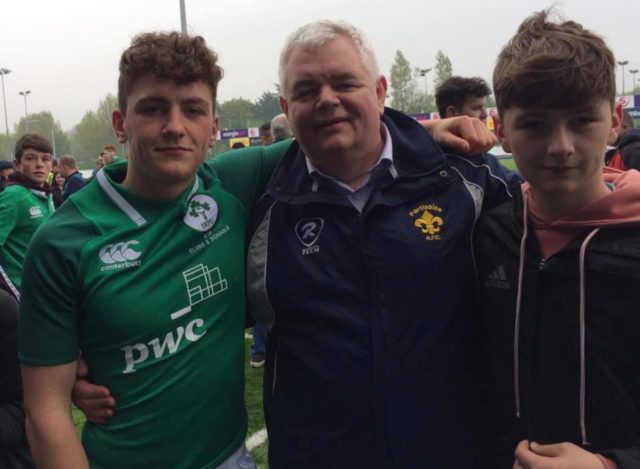 Wednesday April 24 was a tremendous day for young William Reilly, who earned his first ever Irish cap as part of the Ireland Under-18 Clubs & Schools team which defeated England 30-17.

Energia Park set the scene as the Portlaoise scrum-half kitted out in the national jersey. Although he needed to be substituted before half-time, Reilly’s work rate and dedication was immense.

The Portlaoise RFC man has been one to watch for some time now.

Last winter he was selected for the Irish U-18s clubs Christmas camp and received the Pat Kelleher Award at the Portlaoise RFC Awards Night in summer 2018 – crowning him the Young Player of the Year.

He shined on the Leinster team at the U18 Interprovincial championships last summer.

William was part of the U-17 Portlaoise RFC team which enjoyed a remarkable season. They reached three finals and won two of them.

Ireland assured themselves of victory after an outstanding first-half, with Paddy McAlpine, Joseph McCarthy (2) and Josh O’Connor all touching down to give Ireland a 25-3 lead by half-time.

Ireland remained on the front foot for the entire opening half, with a late Louis Kendrick penalty collecting England’s only points in the first 40 minutes.

England performed better in the second half with a more structured defence by Ireland’s built-up lead saw them come out worthy 13 point winners in Energia Park.

This was the first of a two match series for Reilly and his Irish side. Ashbourne RFC hosts the rematch on Saturday, April 27.