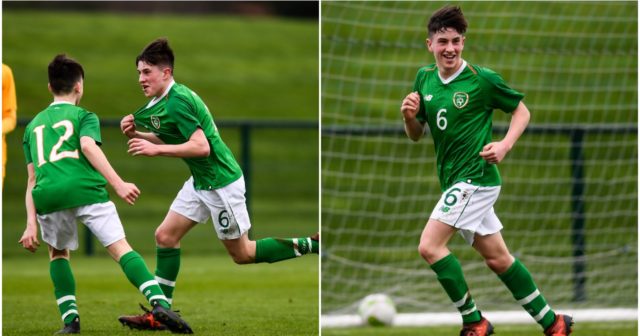 Laois teenager Colin Conroy and his Republic of Ireland U-16 soccer squad has came away with two wins from three in the UEFA development tournament in Israel today.

Portlaoise native Conroy played in two out of the three games for  Paul Osam’s squad who overcame Ukraine this morning.

The Irish side needed a draw or better to win out the development tournament in Israel but were defeated at the hands of Ukraine today.

In their final games of the season, the Under-16s saw off hosts Israel and Fiji over the space of five days along the Mediterranean coast in Shefayim.

They came from behind in sweltering heat to beat hosts Israel 2-1 to get their tournament off to the perfect start.

The former Portlaoise man started the game in the centre of midfield and was one of the few players to remain on the pitch for the entire game.

Conroy was rested for the Fiji game but started midfield in today’s clash against Ukraine.

An action packed first half in today’s game saw Evan Ferguson’s opener cancelled out by two quick-fire Ukrainian goals to leave the Republic of Ireland trailing 2-1 at the break.

Ireland had all of the play in the second half but couldn’t quite find the equaliser against the Ukrainian side.

Colin’s success is a further indication of the upward trajectory that the Bohemians player’s career is on.

Back in March, Conroy was nominated for the U-15 Republic of Ireland International Player of the Year award.

He made the final list of three where he was pipped by Real Betis defender Anselmo Garcia McNulty.

Conroy, who is from Sheffield Cross outside Portlaoise and the son of Martin Conroy and Caroline Allen, was first called up to the Ireland U-15 squad in 2017 and subsequently captained them in a friendly with Poland.

The Portlaoise teenager then played twice against Cyrprus for the U-15s before graduating to the U-16 squad at the end of last year.

Well done to Colin and the Republic of Ireland team!