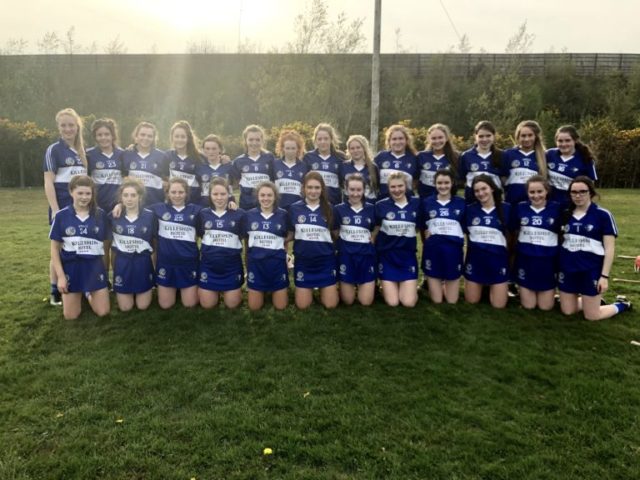 For the second time in two days, Laois camogie have a trophy to add to their cabinet.

Following on from the minors’ thrilling success yesterday, the U16 side forged out another tremendous victory in the Wexford GAA Centre of Excellence today.

From going seven points behind in the first-half, Laois managed to keep Carlow at bay with only three scores in the second half.

Although Laois started ahead, Carlow dominated the first half through full-forward Anna Murphy, corner-forward Kim Doyle and centre-forward Caoimhe Coady.

Caoimhe Jordan wreaked havoc in the opening half – scoring two goals to help bring Carlow six points ahead at half-time.

Ellen Conroy – daughter of former Laois midfielder Declan Conroy – opened the scoring for Laois after Grainne Delaney sent in a soaring ball to the full-forward line.

Captain Karla Whelan slotted over a long-range free to make it 0-2 before Rachel O’Brien and Doyle replied for the Traffic Lights.

Andrea Scully proved to have a Midas touch on frees – sending three over the crossbar in the first half against the breeze.

Carlow’s half forward line inflicted serious damage on Laois, scoring 2-3 between the three of them within 15 minutes.

Carlow went seven ahead before Lucy O’Connor tore into the square and handpassed the sliotar into the net to make it Laois 1-6 Carlow 1-10.

However dangerwoman Jordan cancelled out this lead from the following puckout. A final strike of the half from Andrea Scully made it Carlow 2-10 to Laois’s 1-7.

Laois came out bursting with renewed energy in the second half. Katie Dunican led by example by holding Carlow scoreless.

Lucy O’Connor only had eyes for the goals as she finished off a ball sent in by Aiva Coss into the back of the Carlow net.

Two Andrea Scully frees cut the deficit to just one point making it 2-9 to 2-10 with 20 minutes left and everything to play for.

Caoimhe Coady slotted over Carlow’s first score of the second half with a 65’ before O’Connor cut Carlow’s lead to one after 44 minutes.

Scully and Whelan soared Laois into the lead before Lucy O’Connor made her signature weave through the Carlow defence to slam the sliotar into the net and bring her tally to 3-2.

Laois managed to hold on even with an Anna Murphy goal in the final minute to be crowned Leinster B champions.