This was a remarkable turnaround from the group stages where Navan emerged 17 point victors as Scoil Chriost Ri were just edged out in their bid to claim all three ‘A’ Leinster football titles available to them.

After claiming senior and junior honours earlier this year, Scoil Chriost Ri went into this as outsiders but it was a completely different game on Friday in Johnstownbridge where every ball was hard won and only the width of the post prevented a free kick competition to decide the final outcome.

Scoil Chriost Ri got off to a flying start going five points to no score up with Shannon Fitzpatrick, Tara Byrne and Susie Delaney all finding the target.

Navan showed their class though and responded with a good point of their own before a fortuitous effort at a point dropped into the top corner of the net to leave the minimum between the teams.

There would be plenty of goals in the first half as Tara Byrne who was brilliant all day at centre forward found the back of the net before being cancelled out straight away by Loreto Navan.

The Meath outfit then punished some poor handling in the Chriost Ri defence to rifle an unstoppable shot into the roof of the net.

They should have doubled their lead only for a point blank save from Deirinn Byrne between the Portlaoise sticks. It looked like Navan would head into the half time break with a three point advantage but a cheeky goal from full forward Alice Kerins after the Navan keeper was off her line meant it was all square 2-7 to 3-4 at the interval.

The second half would be a tighter affair as both teams struggled to convert their chances. Some great flowing moves and support play gave Faydagh Dunne and Tara Byrne a chance to add their names to the score sheet again.

Brilliant marking in the backs from the McNulty sisters along with Ashling Fleming deployed as sweeper restricted Navan to three frees in the opening 15 minutes of the second half.

Chriost Ri would take the lead again from a Shannon Fitzpatrick fisted goal but Navan refused to let them off the hook and equalised with a brilliant individual effort from their wing forward.

The teams traded points again before Tara Byrne once again came to the fore to finish a great team move for SCR with her second goal.

Navan clawed their way back with three points as the game headed into injury time all square. Susie Delaney looked to have won it for the Portlaoise school with the last kick of the game but the referee controversially disallowed the point for over-carrying.

It would all finish 4-10 apiece and 10 minutes aside of extra time were required. Navan got off to the brighter start and looked the fresher team as they took a three point lead but Portlaoise refused to roll over with good scores from Tara Byrne and Faydagh Dunne reducing the deficit to one at the break. 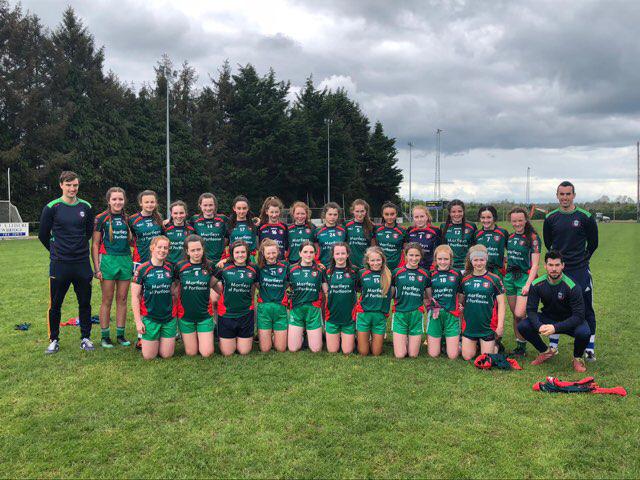 Unfortunately the second period of extra time would prove a frustrating 10 minutes as Navan pushed the lead back out to three and then the keeper pulled off a great diving safe to deny the hard running midfielder Sinead Goode.

It looked as though it was all over before one last moment of drama saw Tara Byrne’s brilliant run and shot smash off the crossbar and find a Navan pair of hands as they put the final seal on it with a point on the whistle to emerge four point winners.

In Pictures: Celebratory scenes for Portlaoise Panthers as they claim U-18 national cup glory

In Pictures: Celebratory scenes for Portlaoise Panthers as they claim U-18 national cup glory