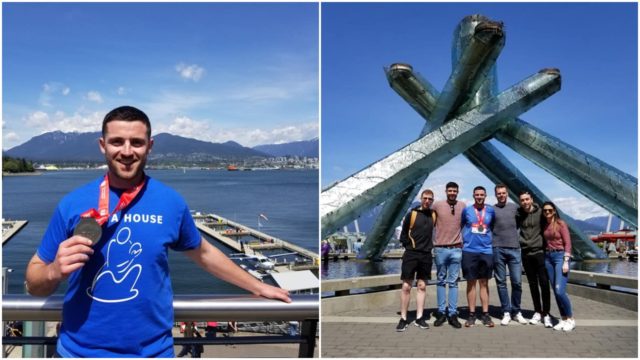 A Laois man has successfully completed the BMO Vancouver marathon in aid of Pieta House and in memory of his cousin, Adam Kennedy.

Steven Rainsford completed the 42.2km run after Adam’s extended family decided to make a difference to the lives of others with a series of fundraisers for Pieta House.

Adam, who was from Portlaoise, was a secondary school student in Portlaoise CBS.

In his memory, members of his immediate and extended family pledged to take on a series of challenges in an effort to raise funds for Pieta House.

As Steven completed the marathon in Canada, he said that Adam was, ‘with me every step of the way’.

“The little man was with me every step of the way, especially the last 8km which were not pretty. I never got to say goodbye and I just hope I did him proud out there today.

“Thanks to everyone for the kind messages and a special thanks to the guys that were there to cheer me on at the finish line.”

Now, Jane and Ellen are set to run in the VHI women’s mini marathon on June 2.

Sean Lacumber will be cycling 136km as part of the Giant’s Causeway Coast Sportive in Belfast on June 22.

To finish, Jack Kennedy will be taking on the “Tough Mudder” challenge, which is an 8 mile obstacle course on July 20.

To donate to Pieta House and support these fundraisers, click here.