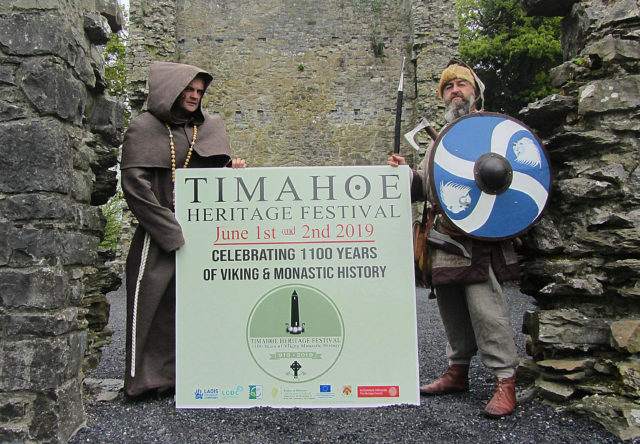 Timahoe will hold its inaugural Heritage Festival on June 1st and 2nd this year. It is a family friendly festival of amazing and fun filled events.

Timahoe Heritage Festival it is all about sharing the story of a village in Co. Laois that is steeped in centuries of history; from monks, monasteries and Vikings, right up to the famine years and the War of Independence, with volumes more in between.

The inspiration behind our festival was the fact that the 1100 year anniversary of the Viking raid on Timahoe was approaching.

It seemed to big a landmark moment in our history to allow it to pass unnoticed and we feel it is an historical story that merits both highlighting and remembrance.

It all kicks off on Saturday, June 1st, when the festival literally hits the ground running, with our Ten Mile Road Race – “The March of the Vikings”, from Vicarstown to Timahoe.

This is the route the Vikings most likely took, from their fort in Dunrally to Timahoe. This challenging route will be a great healthy way to start the festivities, and registration for the event takes place in Timahoe at 9am.

A 5km Run/Walk had also been added in the local environs of Timahoe. Both these races can be booked through our website, or on PopUpRaces.ie.

From 12 pm in the surrounds of the Round Tower, kids will get a chance to enjoy the skills of Archeology, with the “Big Dig” company coming to town to educate us all, with an archeological dig that spans the two days.

There will also be an opportunity to see what it was like to make coins in early medieval times. Also we have wonderful displays in Viking weaponry, that simply have to be seen, and a chance to learn of and sample some early medieval cooking.

There will be lots of other attractions on site to compliment the theme of the festival, including amusements and our Food & Craft Fair.

At 4:00pm The great Eddie Lenihan, the man with the big beard, will captivate kids and adults alike, with his ancient story telling session in the Heritage Centre. All children aged 8 years and upwards are very welcome. Eddie will give accounts of great, age old Irish traditions, and tales of how the Fairies can be little divils!Do you believe in Fairies? Eddie certainly does!

We will have music in both local pubs over the course of the Festival. On both days Tea and coffee plus ice cream will be available from the Corner shop, and all varieties of foodstuffs will be available at the Food & Craft Fair.

On Sunday 2nd June, the event will begin at 11:30, and it will be a combination of the good old styled Irish Fun Family day out, coupled with the continuation of events of the previous day.

Timahoe’s Sports Day medley will take places on the village green, during Sunday’s festivities. We must not forget to mention you’ll see lots of Vikings and Monks! Our Viking Raid Battle Reenactment is not to be missed!

Our Fancy Dress Competition is open to both young and old, and the theme is Vikings, Monks & Medieval. We encourage everyone to come along in the ancient garb of their choice, and our judges will mingle among the crowd, before announcing the winner!

Our aim is to establish Timahoe Heritage Festival as an annual event, to strengthen our bonds of community and to highlight and showcase the history and heritage of our village. Our inaugural event is simply the latest chapter in that history.

Timahoe can trace its religious past as far back as the beginning of the 7th century, through the ruins of a church in the old Parish of Fossey, though little else is known of the site. What is more certain though, is the association between Timahoe and its patron Saint, Mochua.

St. Mochua lived in Timahoe sometime during the seventh century and established a monastery there, before journeying northwards, no doubt to spread the Word of God.

There are many Irish Saints named Mochua, and Timahoe’s Mochua can be identified as the son of Lonan. Mochua was originally from Achonry in Connaught, and was a successful soldier before becoming a monk.

According to folklore, Mochua lived at Timahoe as a hermit with only a rooster, a mouse and a fly. The rooster would ensure that Mochua never missed matins (morning prayers). The mouse would nibble his ear if he fell asleep, to ensure he didn’t miss prayers during the day. At night, as Mochua read, the fly would walk along the texts, to make sure he never lost his word.

As if that wasn’t enough, if the Saint did happen to fall asleep, the fly would would halt it’s march across the text, and remain at the word, Mochua dozed off at.

There is a modern piece of sculpture at Timahoe’s Heritage Centre, called St. Mochua’s Desk, which commemorates this wonderful tale.

It is believed that no other religious buildings were constructed at Timahoe until sometime prior to the end of the 9th century. Formerly a church and a monastic establishment were located beside the “pillar-tower” which still stands today.

History tells us that in the year 919 the Oratory of Mochua, was burnt down by marauding Norsemen. In 1142, the Annals of the Four Masters again records the burning of Teach-Mochua.

That monastery was believed to have been founded by the O’Mores, but little written history of its existence or history has survived.

In 1069 Gillamaire, son of Dubh (MacDuff) was slain in the doorway of Teach-Mochua, by Macraith Ua Mordha (O’More).

It is said that the two rivals had previously sworen a peace pact upon a relic referred to as Caimin. This is possibly a reference to a relic of St. Caimin, who died in 652. At the time he was killed, the betrayed MacDuff was holding the relic in his hand, and it is said it will forever remain stained with his blood!

It is also known that a religious community still existed at Timahoe in 1650, when Cromwellian general, Hewson, after decimating the stronghold at Dunamase and overrunning the Queen’s County, turned his charge towards it. To add to his many acts of cruelty and utter devastation in the county, Hewson murdered all the friars of the abbey.

The tower at Timahoe is considered one of the finest examples of a round tower in Ireland.

It rises six storeys high, or just under 30 metres, and is topped with a conical cap, added in the late 19th century after damage to the original roof structure.

The two metre thick walls have ensured the tower still stands tall, despite a lean from bottom to top, estimated at approximately one metre.

Time has not been as kind to the structure of the interior. There were five separate levels, constructed of timber, each of which were accessed by ladders, but alas it is no longer possible to do so, as all internal floors are long gone.

Five metres from ground level, the stunning carved doorway is one of the finest examples of 12th century Romanesque style carving.

Facing east north east the doorway has four orders, two on the exterior and two inside. The capitals of the pillars feature beautifully carved heads, with intertwining hair, similar to carvings found at St. Saviours and Glendalough.

On the tower’s third floor window, carved into the third order is a very rare example of a ‘seán-na-gig’, the male version of the more common sheela-na-gig, one of which was said to have adorned the ruined church house structure, on the site.

In 2014,the community of Timahoe, in conjunction with Laois County Council and the O.P.W. opened the wonderful Timahoe Heritage Centre, on the grounds of the former monastic site.

The centre is part of the Ireland’s Ancient East initiative, and makes for an extremely enjoyable visit. Visitors to Timahoe are always welcome, and highlighting the history and heritage of our beautiful village, with a view to attracting more, is one of the main aims of the Timahoe Heritage Festival. 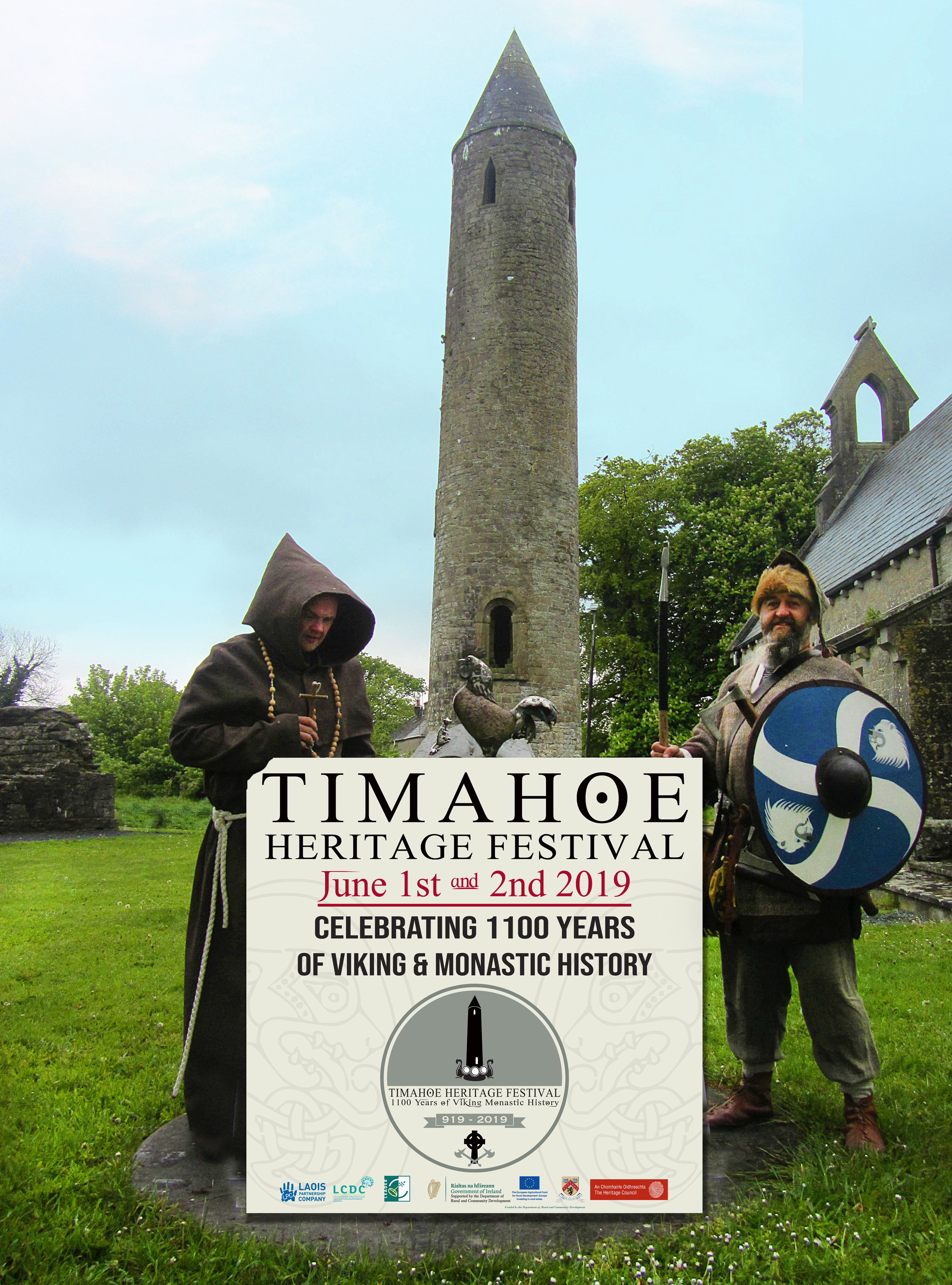