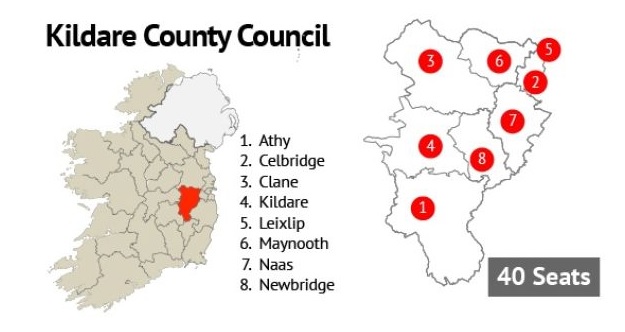 In the final week of the Local Elections campaign, we’re keeping an eye on what’s happening across the border.

Today we look at Kildare, which will become far more relevant to a number of Laois voters at the next General Election with over 10,000 people from Portarlington, Killenard and Ballybrittas being moved into Kildare South.

For Local Election purposes, Kildare is now just one council – with 40 seats (compared to 19 in Laois) in total across eight areas. There are 90 candidates in Kildare in total.

While the Laois areas were left largely unchanged by the boundary commission in 2018, Kildare has undergone considerable change – with eight areas now in play compared to six in 2014.

Our focus is on the areas closest to us – chiefly Athy, Kildare and Newbridge.

Athy, a six-seater in 2014, has been reduced to five seats with Monasterevin now in with the re-drawn Kildare area.

Monasterevin has been victim of changing boundaries for the best part of the last decade being moved from one area or constitutuency to the other – it was part of the Athy area in 2014, in Laois for the 2016 General Election, now in the new Kildare Local Electoral Area for these elections and then back in Kildare South for the next General.

There are 10 candidates for the five seats in Athy – with five sitting councillors all in the race.

Poll topper in 2014 Martin Miley (Fianna Fáil) has retired from politics and isn’t running on this occasion but Labour duo Mark Wall from Castlemitchell (son of former TD Jack and a candidate in the next General Election as well as the last one) and Aoife Breslin from Athy are both in the race.

Ivan Keatley (Fine Gael) from Kilcullen is also in the running. A close associate of TD Martin Heydon, he was elected in 2014 having been co-opted in 2011 after Heydon was elected to the Dáil.

Brian Dooley is Fianna Fáil’s only sitting councillor but he was only co-opted to the council late last year following the resignation of Mark Dalton. Dalton has admitted to stealing €200,000 from a voluntary housing association of which he was a director.

Sinn Féin’s Thomas Redmond is the other incumbent putting his name forward again. He took the final seat in 2014 when he came from behind to beat the Monasterevin-based pharmacist and Mountrath native Richard O’Rourke (Fine Gael).

Other candidates in the mix include Vera Louise Behan (Fianna Fáil) who is from Maganey, right on the Kildare-Laois-Carlow border and who called on Anna May McHugh to launch her campaign recently.

This is essentially a new area, taking in Monasterevin, Kildare Town and surrounding rural areas.

Kildare Town’s Suzanne Doyle (Fianna Fáil) and Rathangan’s Mark Stafford (Fine Gael) are the only two sitting councillors from the old Kildare-Newbridge nine-seater that are running although Sinn Féin’s Patricia Ryan and Independent Declan Crowe both have considerable profile following respectable showings in the last General Election when they polled 4,267 and 2,143 first preferences respectively.

Ryan, who was the last to be eliminated in the General Election, is originally from Ballybrittas and went to school in the local Rath NS.

Kevin Duffy (Fine Gael) is another candidate with strong links to that area. A first-time candidate from Monasterevin, Kevin’s  father Louis is originally from Ballyadden, between Ballybrittas and Rath, and the extended Duffy family are heavily involved in the local community there.

The other candidates in the Kildare area are: Anne Connolly (Fine Gael), Paul Hutchinson (Labour) and Colette Newman (Green Party).

The Newbridge area has undergone change also not just in its geography but also the make-up of its candidates and councillors.

Four sitting councillors are in the running for the six seats – but only one of them, Fiona McLoughlin-Healy, was elected the last time in the old Newbridge area.

Then she was representing Fine Gael, as she did in the last General Election when she got over 3,000 first preferences before being eliminated and helping Martin Heydon over the line with her transfers. But now she is an Independent following a dispute with the party.

Robert Power (Fianna Fáil) was elected on the last occasion in Naas but is in the Newbridge area now where his father Sean, a former TD, was elected the last time but isn’t running on this occasion. Power is of considerable Fianna Fáil heritage as his grand-father Paddy was a TD from 1969 to 1989 and held three ministerial positions in the late ’70s and early ’80s.

The other five areas in Kildare are all in the north of the county with three seats in Clane, four in Celbridge, five in Clane and Maynooth and seven in Naas.

You can keep track of all of the updates in Kildare on the RTE tracker here.