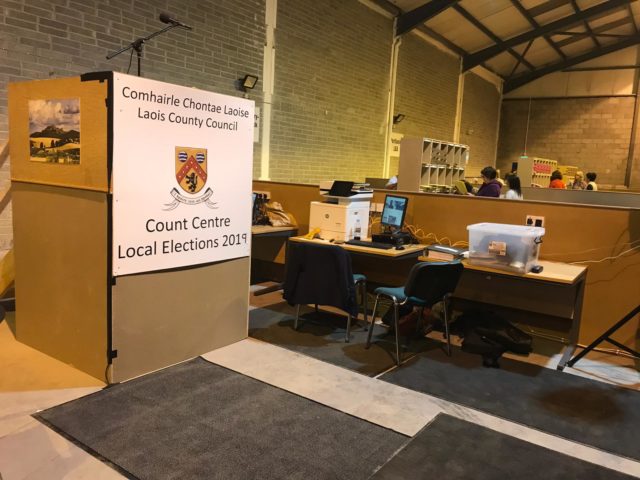 The Laois Local Election count is going to be adjourned until Sunday morning, with Returning Officer Donal Brennan set to make the announcement in the next hour.

Laois County Council staff have been counting votes in a warehouse in Kealew Business Park in Portlaoise since 6pm – but there has been no official first count results announced yet.

With staff due an 11-hour break, the counting will re-commence early on Sunday morning.

Willie Aird (Fine Gael) and John Joe Fennelly (Fianna Fáil) are set to be elected on the first count in the Portlaoise area, according to tallies while outgoing councillors Noel Tuohy (Labour), Catherine Fitzgerald (Fianna Fail), Mary Sweeney (Fine Gael) and Caroline Dwane-Stanley (Sinn Fein) are all in a strong position.

The fight for the last seat is set to be a protracted one. Pakistani native Naeem Iqbal (an independent candidate) is leading the way at the moment followed by Thomasina Connell (Fine Gael), Dom Dunne (Renua) and Fianna Fail duo Pauline Madigan and Donal Kelly.

Padraig Fleming (Fianna Fail), Aidan Mullins (Sinn Féin) and Tom Mulhall (Fine Gael) should be elected on the first count also while Paschal McEvoy (Fianna Fail) is set to cross the line, possibly as early as the second count. Ben Brennan is also in a strong position.

Aisling Moran (Fine Gael) is leading the way for the final seat in that area, ahead of Labour’s Eoin Barry.

The battle in Borris-Mountmellick should play out to be a fascinating one.

James Kelly (Independent) and Paddy Bracken (Fianna Fail) are certs, although won’t be elected on the first count.