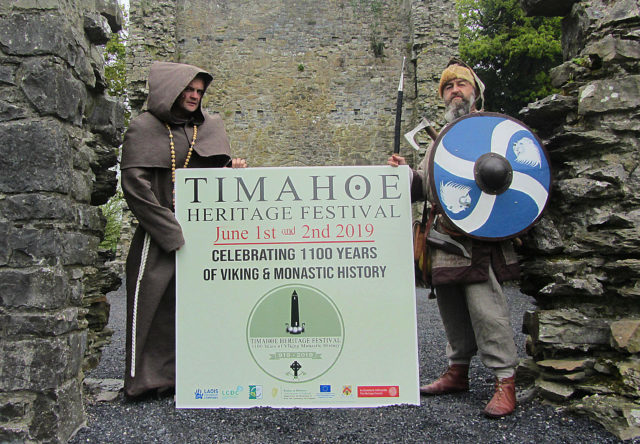 Timahoe will hold its inaugural Heritage Festival on June 1 and 2 this year and it is a family friendly festival of amazing and fun filled events.

Timahoe Heritage Festival it is all about sharing the story of a village in Laois that is steeped in centuries of history; from monks, monasteries and Vikings, right up to the famine years and the War of Independence, with volumes more in between.

The inspiration behind our festival was the fact that the 1100 year anniversary of the Viking raid on Timahoe was approaching.

It seemed to big a landmark moment in our history to allow it to pass unnoticed and we feel it is an historical story that merits both highlighting and remembrance.

It all kicks off on Saturday, June 1, when the festival literally hits the ground running, with the Ten Mile Road Race – “The March of the Vikings”, from Vicarstown to Timahoe.

This is the route the Vikings most likely took, from their fort in Dunrally to Timahoe. This challenging route will be a great healthy way to start the festivities, and registration for the event takes place in Timahoe at 9am.

A 5km Run/Walk had also been added in the local environs of Timahoe. Both these races can be booked through the website, or on PopUpRaces.ie.

From 12 pm in the surrounds of the Round Tower, kids will get a chance to enjoy the skills of Archeology, with the “Big Dig” company coming to town to educate us all, with an archeological dig that spans the two days.

There will also be an opportunity to see what it was like to make coins in early medieval times. Also there will be wonderful displays in Viking weaponry, that simply have to be seen, and a chance to learn of and sample some early medieval cooking.

There will be lots of other attractions on site to compliment the theme of the festival, including amusements and our Food & Craft Fair.

At 4pm The great Eddie Lenihan, the man with the big beard, will captivate kids and adults alike, with his ancient story telling session in the Heritage Centre. All children aged 8 years and upwards are very welcome. Eddie will give accounts of great, age old Irish traditions, and tales of how the Fairies can be little divils! Do you believe in Fairies? Eddie certainly does!

We will have music in both local pubs over the course of the Festival. On both days Tea and coffee plus ice cream will be available from the Corner shop, and all varieties of foodstuffs will be available at the Food & Craft Fair.

On Sunday 2 June, the event will begin at 11:30am, and it will be a combination of the good old styled Irish Fun Family day out, coupled with the continuation of events of the previous day.

Timahoe’s Sports Day medley will take places on the village green, during Sunday’s festivities. We must not forget to mention you’ll see lots of Vikings and Monks! The Viking Raid Battle Reenactment is not to be missed!

The Fancy Dress Competition is open to both young and old, and the theme is Vikings, Monks & Medieval. We encourage everyone to come along in the ancient garb of their choice, and our judges will mingle among the crowd, before announcing the winner!

The aim is to establish Timahoe Heritage Festival as an annual event, to strengthen our bonds of community and to highlight and showcase the history and heritage of our village. The inaugural event is simply the latest chapter in that history.