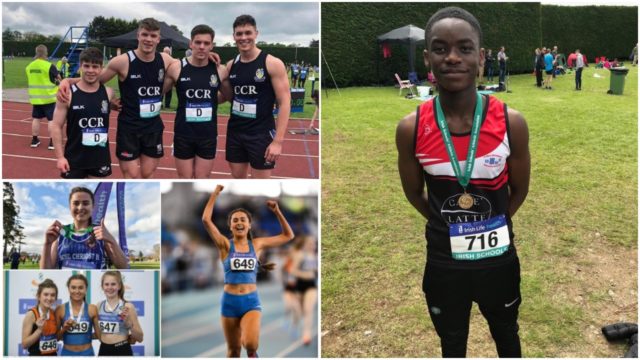 There was plenty of Laois success in Tullamore yesterday at the All-Ireland School’s Track & Field Finals.

With the academic year now over for all bar those sitting the State exams next week, this was the final act for many of the students for this year.

And what a day it was as Laois athletes took home a total eight medals – one gold, three silver and four bronze.

The only gold on its way back to Laois went to Portlaoise CBS’ Anthony Idris who claimed first in the Junior Boys Triple Jump.

This is a remarkable achievement for the Junior Cert student who could only manage a bronze medal at the Leinster finals a couple of weeks ago.

But his jump of 11.40m could not be beaten and Idris claimed the coveted gold medal.

We had three silver medals with two of them being won by Laois students who are in schools that are outside of the county.

Scoil Chriost Ri’s Ava O’Connor finished second in the Intermediate Girls 1,500m in a time of 4.40 – three seconds behind the winner.

Kilkenny College’s Ruby Millet, who is a member of the St Abban’s club, claimed silver in the Senior Girls Long Jump while Killenard native Luc Culliton, running for Cistercian College Roscrea, was part of the 4x100m relay team that also finished as runners up.

There were a number of other very impressive individual performances from the other Laois athletes who took part.