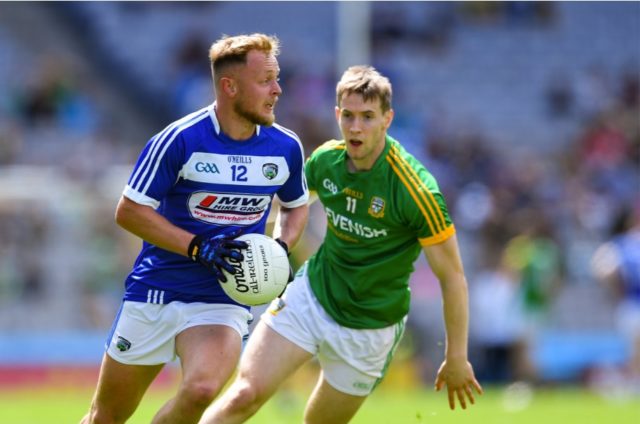 Laois’s hopes of reaching a second successive Leinster football final were dashed in Croke Park this afternoon as two first-half Meath goals proved too much to overcome.

It means John Sugrue’s men go into the draw for Round 2 of the All Ireland Qualifiers and must bounce back quickly – as they will be back in action on the weekend of June 22/23.

It was a frustrating afternoon as Laois had plenty of chances over the course of the 70 minutes but struggled to make an impact and found themselves five points down at the break.

While Laois dominated possession in the opening quarter, it took them until the 15th minute to get their first score, a free from Evan O’Carroll after Damien O’Connor was clobbered into by Meath full-back Conor McGill.

Meath had taken an early lead when corner-back Seamus Lavin spun one over – but Laois had the lion’s share of the ball after that yet couldn’t make it count. Evan O’Carroll kicked three wides and dropped one short while Kieran Lillis also saw another go astray.

O’Carroll did pull back a free but Conlon’s dander was up at the other end and he fired over his third.

Colm Murphy, however, responded with two in a row for Laois from play. The first came after a great catch from John O’Loughlin from a Graham Brody kickout and then good support from Paddy O’Sullivan, the second was punched over after he came in along the endline himself.

Conlon again edged Meath ahead with his fourth and Laois breathed a sigh of relief when Cian O’Sullivan raced through in the 26th minute but blazed wide when one-on-one with Brody.

But Meath did hit the net a couple of minutes later when Bryan Menton finished smartly after being put through by O’Sullivan.

Donie Kingston – just moments on the field in place of O’Carroll – responded straight away with a nice effort off his left although picked up a yellow card for lashing out at Meath defender Shane Gallagher straight after kicking the score.

Newman duly fired it to the net and it was the last act of the half – as Meath headed for the dressing room with a 2-6 to 0-7 lead.

It meant Laois had a huge mountain to climb in the second half. They did start the second half in the pattern they had played most of the first: plenty of chances but minimal return.

Donie Kingston swung one over but Conor Boyle and Paul Kingston kicked wides and Colm Murphy saw a great goal chance come back off the crossbar.

A Kingston free brought it back to three but Meath cancelled that out when they got their first score of the second half with a Newman free in the 50th minute.

Laois had a half goal chance when Kieran Lillis was put through by Donie Kingston but his effort into the Hill 16 end went wide and a couple of Cillian O’Sullivan points and one from Bryan McMahon kept Meath a safe distance clear.

Donie Kingston forced a great save out of Andrew Colgan on the hour mark but Meath put the issue beyond doubt in the 62nd minute when Bryan Menton crashed home his second goal.

In the end Meath had 11 points to spare as they go forward to a Leinster final in two weeks time.