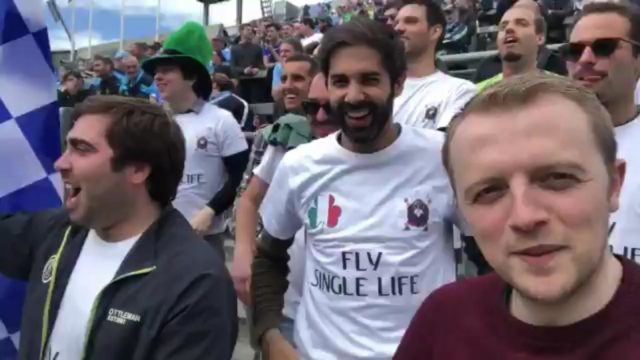 Well, this is certainly something else.

The Laois senior footballers took on Meath in Croke Park on Sunday in the Leinster semi final and while the result may not have gone their way – they seemed to have picked up some new fans from the continent.

Virgin Media’s Political Correspondent Gavan Reilly, a Meath man, was in Hill 16 on Sunday when all of a sudden the journalist found himself surrounded by an unusual group of Laois fans.

A group of lads from Portugal, who were on a stag party in Dublin, had wandered into Croke Park and decided to shout for Laois.

They purchased a blue and white flag outside the ground and told Reilly they were shouting for the O’Moore County because they wore the same colours as their local soccer team – FC Porto.

Donning white t-shits with ‘Fly Single Life’ inscribed on them, they bounced up and down chanting ‘LEE-SHA’ on the Hill.

Reilly explained how they were amazed at the pronunciation of ‘Laois’ and also that all of the players on show were amateurs.

After being understandably disappointed at Laois’s defeat, the Portuguese lads are likely to have been thrilled later on Sunday evening when their country defeat The Netherlands to claim the first ever Nations League.

Goncalo Guedes’s thumping strike settled the final in Porto on the hour mark for Portugal.

Hopefully the lads will make the trip to Celtic Park in Derry in two weeks time for Round 2 of the All-Ireland Qualifiers!

Check out the full thread from Gavan below:

Update: this Portuguese stag party have joined us on Hill 16… to support Laois ? #gaa pic.twitter.com/Z8J5QMUD3E