With each passing week, we are getting increasingly closer to the start of the Laois championships.

Right now, the majority of the leagues are getting down to the final round or two.

All six divisions have semi finals this year and all of them still have something to play for in terms of final, semi final and relegation positions.

Below, we have profiled each of the leagues and taken a closer look at how they are likely to pan out in the coming weeks.

There are just two rounds to go in Division 1 with semi-final and final places along with relegation yet to be confirmed.

Defending champions Camross sit third in Division 1 but if they win their remaining two games against Borris-Kilcotton and Castletown, they may well end up top of the pile.

There is the chance that all three teams at the top of the table, Camross, Clough-Ballacolla and Borris-Kilcotton could end up level on 12 points at the end of regulation games too as Borris-Kilcotton and Ballacolla are set to meet in the final round.

Second and third will play in a semi final with the top team advancing straight to the league final.

At the foot of the table, Abbeyleix currently sit bottom of the table and will need to pick up a win from their final two games to have any chance of staying up.

They face table toppers Clough-Ballacolla next and then The Harps in their last game. If they lose to Ballacolla, they could be down before they play The Harps should the Durrow outfit get any sort of result from their second last game against Rosenallis.

Third from bottom Castletown could come into the mix for relegation if they lose their remaining fixtures against Camross and Rathdowney-Errill but their earlier victory over Abbeyleix may prove decisive on head-to-head.

The picture in Division 1A is even more complicated with all bar one of the teams in with a shout of reaching the final and semi final with two rounds to play.

Ballinakill currently sit top of the pile and a win in either of their remaining games against Rathdowney-Errill and Portlaoise will see them guaranteed a semi final place at the very least.

But after that it is all to play for as Colt, Mountrath, Ballyfin, Rathdowney-Errill, Clough-Ballacolla and Portlaoise could all get a semi final place at the very least.

Down at the bottom, Clonaslee are already relegated – even if they win their two remaining games. This is because they have lost to both Mountrath and Colt – who still have to play each other in one of their remaining games.

So one of those teams is going to amass more than four points meaning that even if the other fails to gain another, they will finish ahead of Clonaslee on head-to-head at the very least. 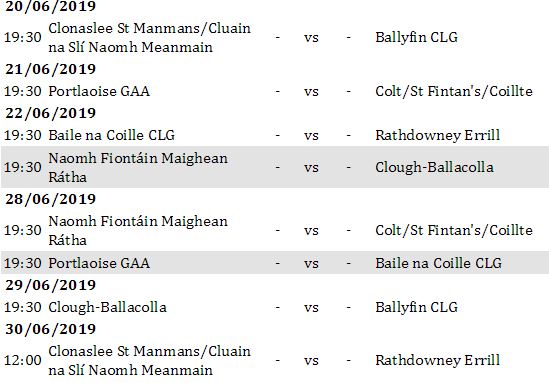 With one round to go in Division 2, all that remains to be settled is who will join Shanahoe in the semi final.

Camross are in the final and Clonad are relegated for the second successive year but five teams could mathematically join Shanahoe in the semi final.

If Borris-Kilcotton defeat The Harps, they will join Shanahoe as even a Slieve Bloom win over Mountmellick, although it would leave them level on points with Borris-Kilcotton, would see them lose out on head-to-head.

But if The Harps defeat Borris-Kilcotton, it opens up a situation where the remaining five teams come into play. And because of a walkover, points difference can not be used to split teams in the event that more than one finish tied for third.

Ballinakill are relegated here but the final and semi final spots are still up for grabs with just three games remaining.

Castletown and Park-Ratheniska-Timahoe play each other where in the latter avoid defeat, they will seal a place in the final.

Similarly a win for Castletown will land them in the final but failing that they will contest the semi final at the very worst.

Portlaoise’s loss to Rathdowney-Errill earlier means they cannot go above them even with a win.

Just like in Division 2, Camross are safely in the final with one game to play here but who will reach the semi finals remains to be determined.

Mountrath are in pole position where a win over Kyle will guarantee them a spot with one of Rathdowney-Errill, Park-Ratheniska-Timahoe and Rosenallis in the hunt to join them.

While at the bottom, The Harps are relegated even if they win their remaining game as they cannot pass Kyle on head-to-head.

All to play for here with four teams in the hunt for the two semi final places available.

Clonaslee are in the driving seat where a win against Slieve Bloom will see them through but Borris-Kilcotton, Castletown and Camross could also snatch the second available place.

The top team will play the runner up in Division 5B while second place will face the Division 5B winner in the semi final.

And the final Division is the only one that has almost everything sorted and just one game to play.

Colt and Portlaoise will qualify for the semi finals and they face each other in the last game to determine who finishes first and second.