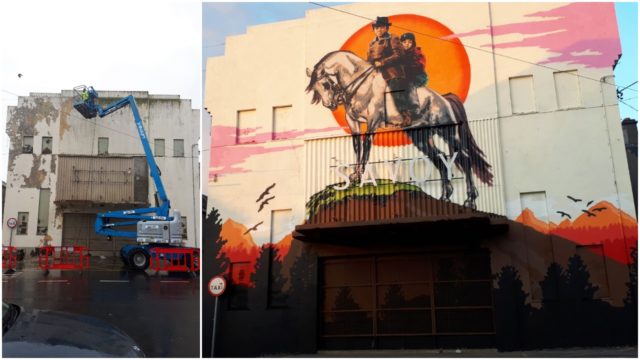 The Savoy Cinema in Portarlington has undergone a remarkable transformation ahead of a screening of a well loved film this weekend.

Two screenings of ‘Into the West’ will be shown this Saturday in the Church of Ireland Hall in the town and a wonderful mural has been created on the old cinema in anticipation.

Local resident and artist, ADW, began creating a mural inspired by the film ‘Into the West’ (1992) on June 4 on the front of the Old Cinema, Market Square.

The cinema scene in the film was shot in the Old Cinema as well as nearby Lea Castle also being used as a film location.

As part of the mural project, pupils from Sandy Lane National School and St Patrick’s Boys National School visited the mural on Monday June 10, discovering what goes in to creating a large scale out-door artwork and were put to work with paint rollers and brushes to participate in the creation of the mural.

The mural will be launched to the public on Saturday June 15 at 5pm as part of a Laois wide celebration of Cruinniú na nÓg; a national day of FREE creativity for children and young people.

Cruinniú na nÓg is an initiative of the Creative Ireland Programme (2018 – 2022) presenented in partnership with Laois County Council and RTÉ.

The site-specific mural pays homage to the iconic film and will be a trip down memory lane for many local people who were ‘extras’ in the making of the film, holding a special place in the folklore and the hearts of the townspeople, as well as the opportunity to introduce this beloved and enchanting film to new and young audiences.

ADW, a Dublin native, living in Portarlington and internationally known 3D artist and muralist is very excited to be part of Cruinniú na nÓg and having the opportunity to paint a landmark building in the town.

He hopes that the mural will inspire and add some colour to the area while also appreciating its local ‘cinematic’ history. 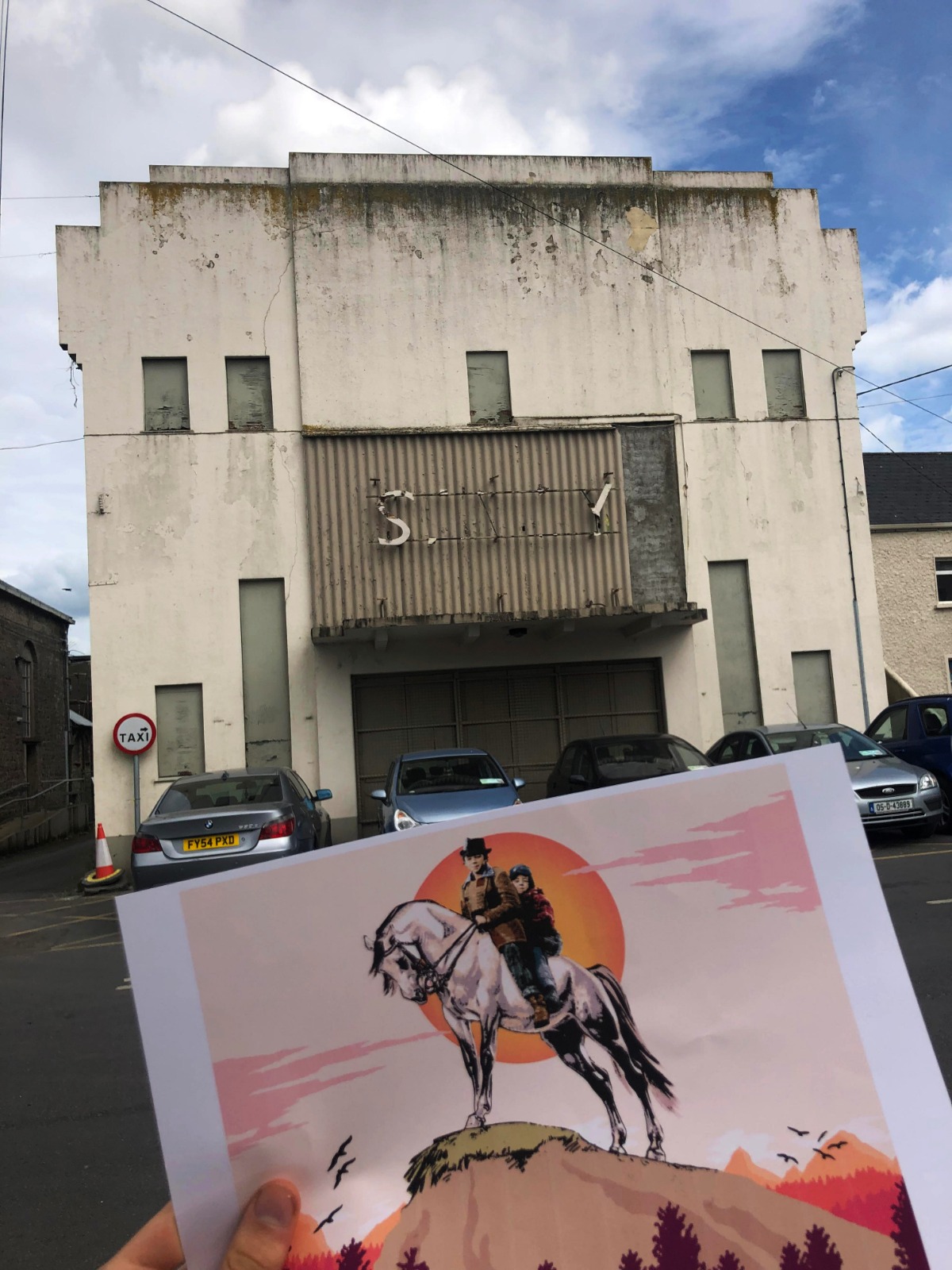 He said: “My latest mural complete on June 10 and biggest to date.

“It is inspired by the 1992 Irish movie ‘Into the West’ where some of the movies iconic scenes where shot at this Savoy cinema in Portarlington. 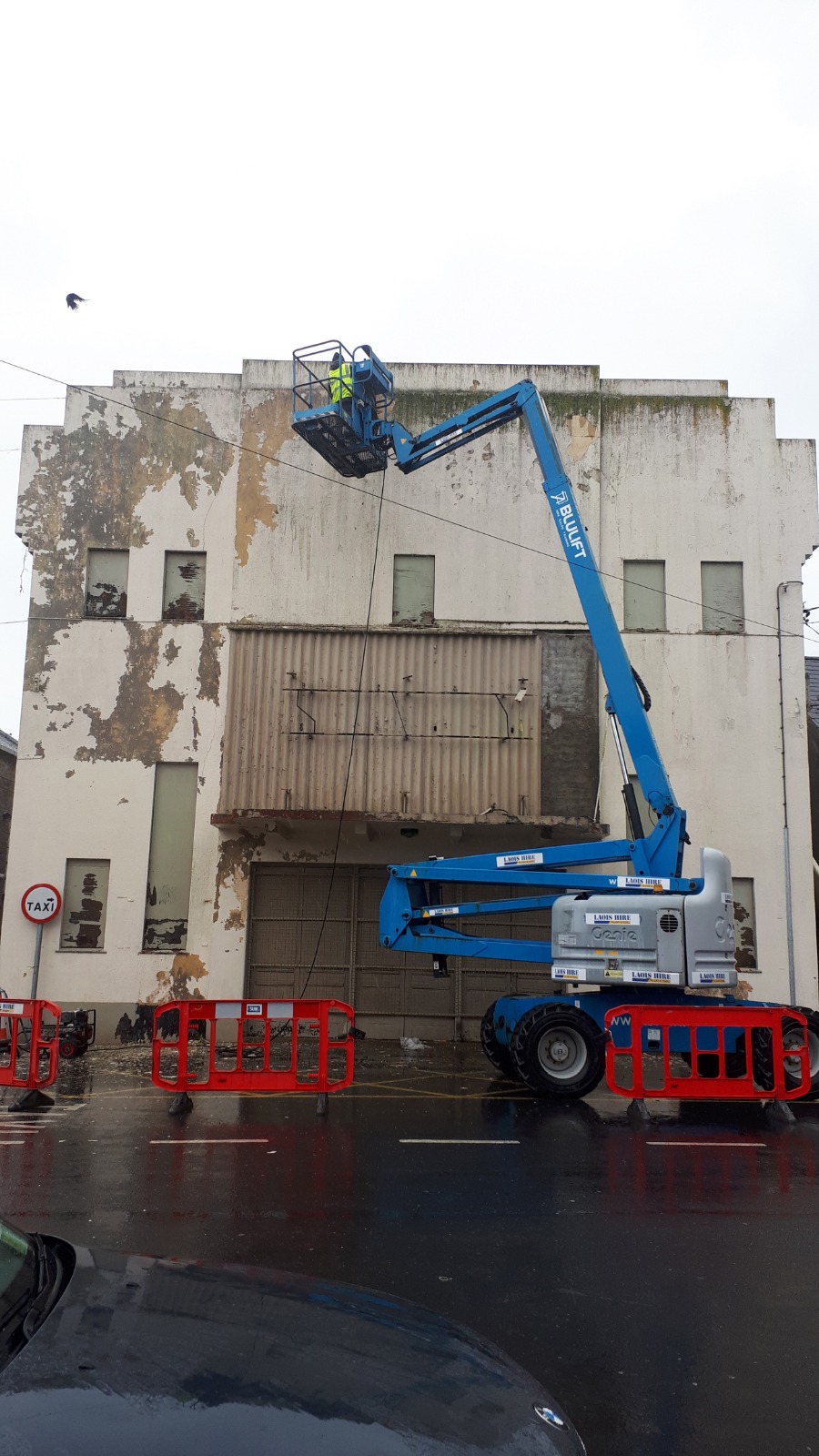 “The cinema has been old and drab since closing over 25 years ago in the hub of the town. Getting the chance to paint such an amazing building and brightening the town was a great honor.

“Hearing the local recollections of the shooting of the movie and the buzz that the artwork has created has been truly overwhelming.” 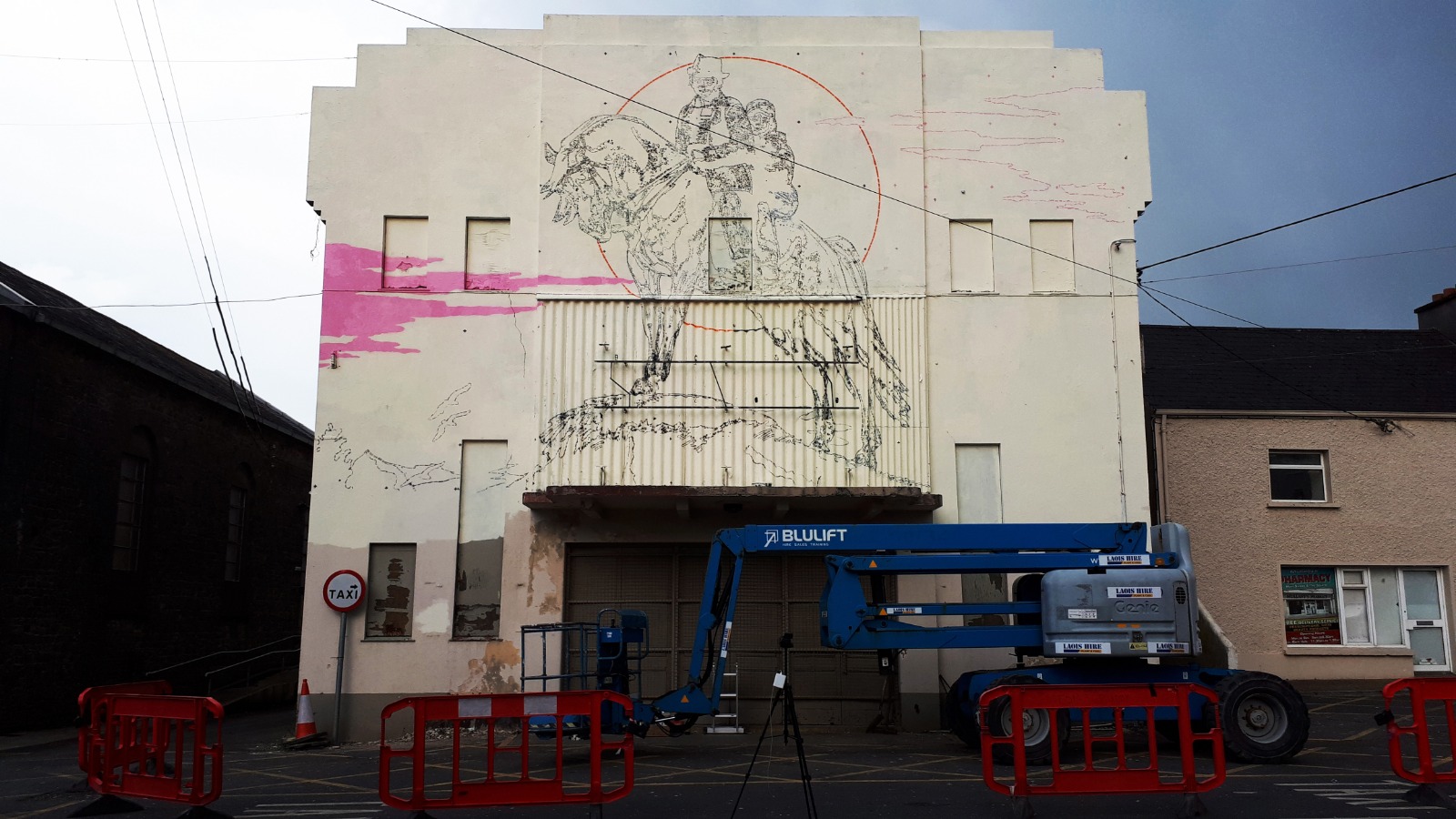 Two free screenings of the film will take place in the Church of Ireland Hall. Market Square at 3pm & 5.30pm on the same day, Sat June 15.

Enterprising young volunteers from Portarlington Youth Club will be involved in ushering film goers into the Hall and to their seats as well as running a Tuck shop. 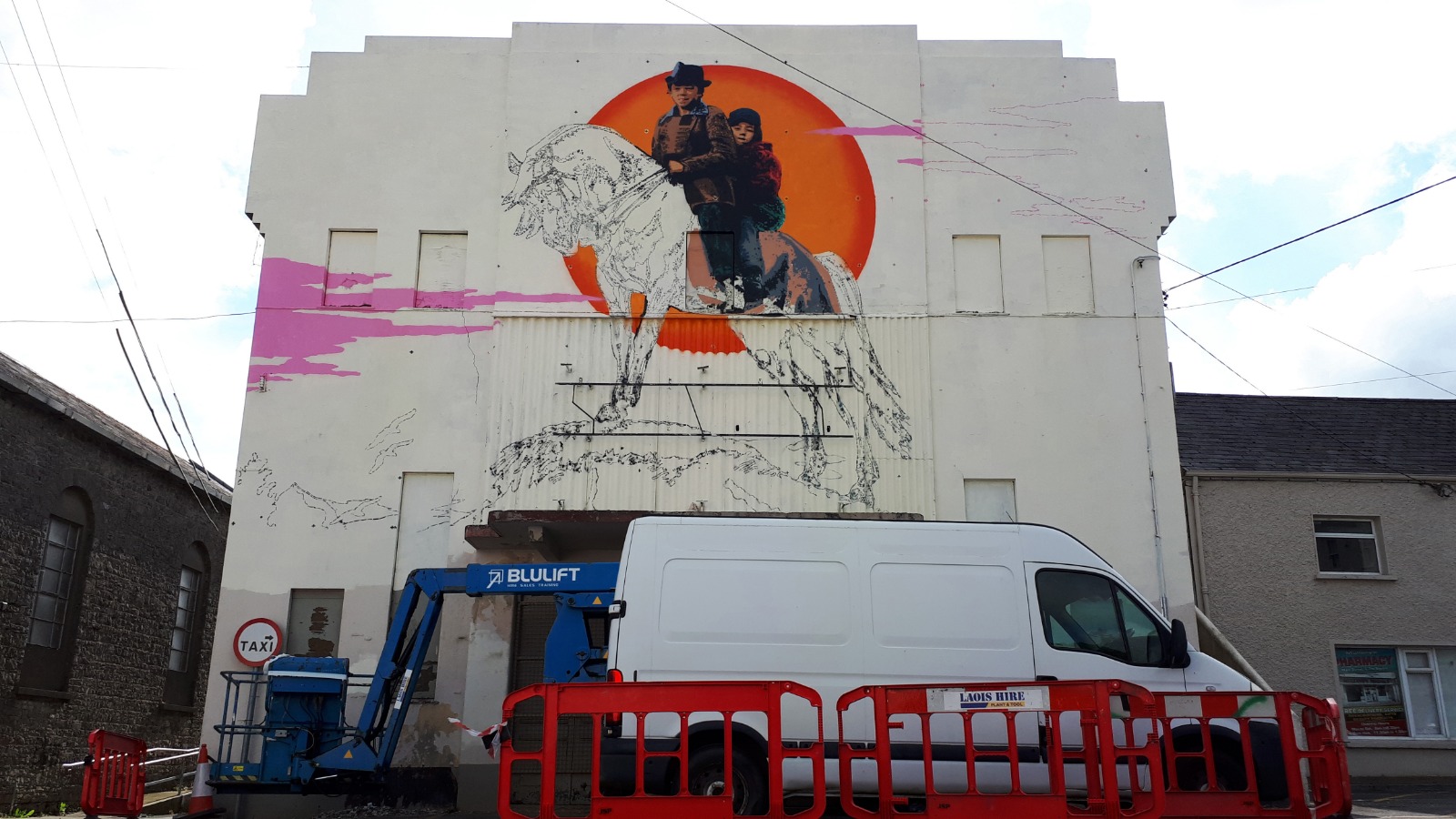 Event organisers are encouraging all locals that were ‘extras’ in the film to come to the launch and share their stories about their involvement in the making of the film.

‘Into the West’ is an Irish magical realist film about Irish Travellers and was written by playwright, screenwriter, film director, and film producer, Jim Sheridan, who also is director of two critically well-known and acclaimed films set in Ireland (‘My Left Foot’ and ‘In the Name of the Father’) and between them received 13 Academy Award nominations. 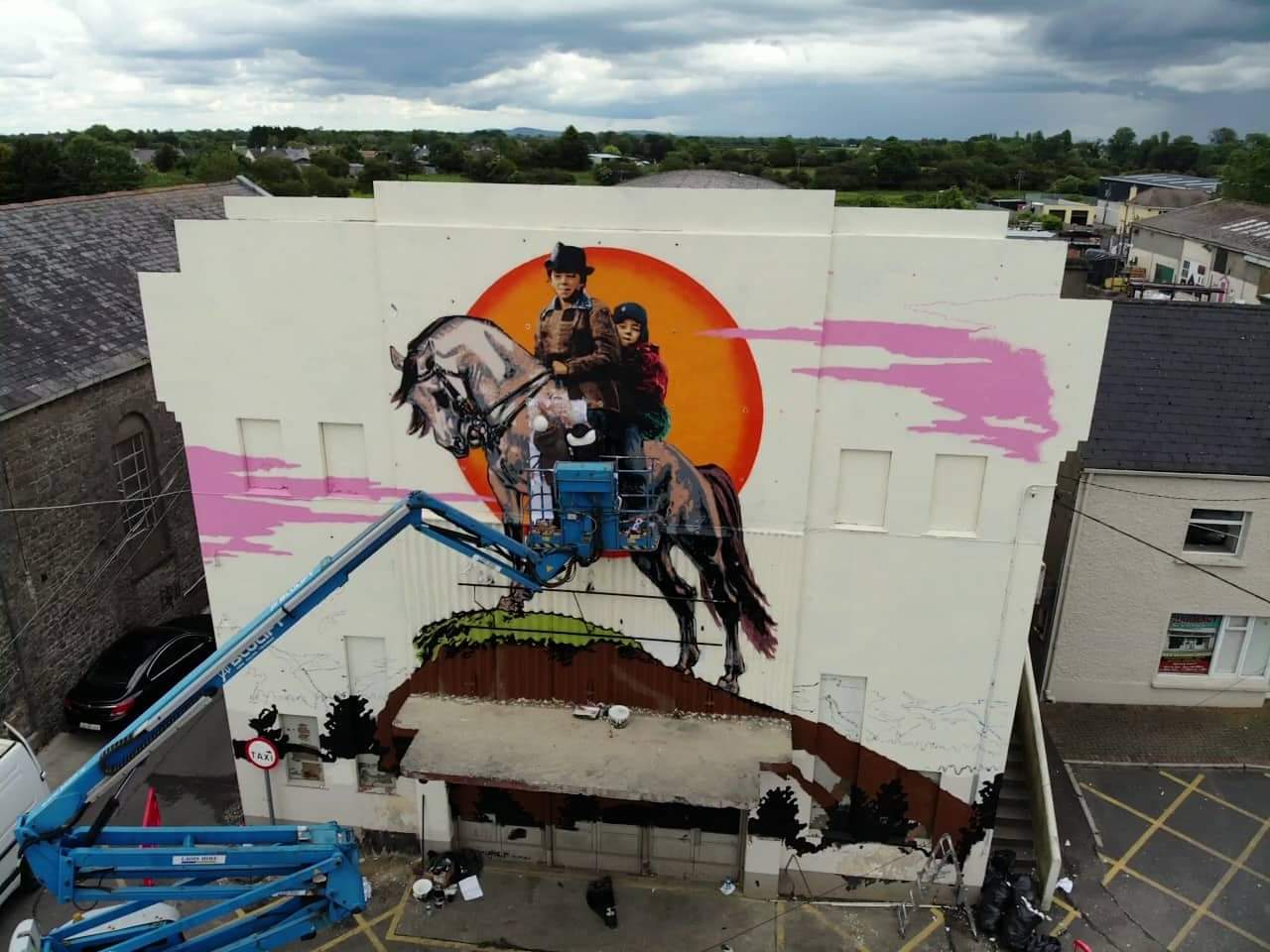 Unfortunately, Mr Sheridan is unable to attend the screenings but when approached to comment on the upcoming Cruinniú na nÓg event in Portarlington, he said: ” ‘Into The West’ has turned out to be a great film for both adults and children to share and enjoy – it is that rare thing – a family movie.

“So if you have sons, daughters, grandchildren, nieces, nephews, bring them along to share the experience.” 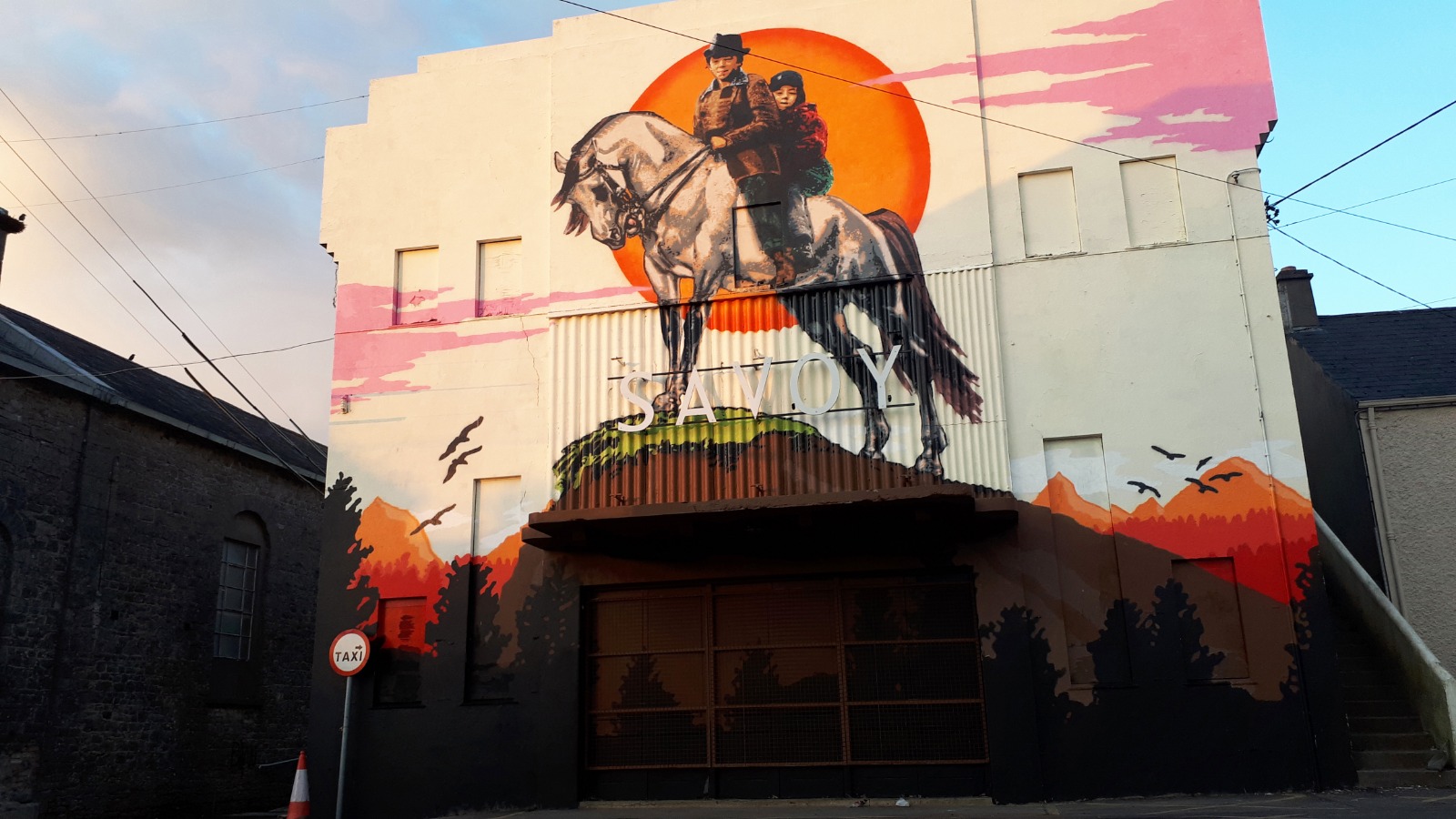