With each passing week, we are getting increasingly closer to the start of the Laois championships.

Right now, the majority of the leagues are getting down to the closing stages.

Four of the six divisions have semi finals this year and all of them still have something to play for in terms of final, semi final and relegation positions.

Below, we have profiled each of the leagues and taken a closer look at how they are likely to pan out in the coming weeks.

All teams aside from O’Dempsey’s and Graiguecullen have five games to play and the situation at either end of the table is uncertain.

At the top, O’Dempsey’s, who are striving for their third league title in a row, are in pole position to reach the final as they probably only need two more wins from their remaining games to secure a top two finish.

St Joseph’s have been their opponents for this last few years but it seems this year it is more likely going to be Portlaoise – with Graiguecullen waiting for any slip from the county champions.

At the foot of the table, any two teams from The Heath, Arles-Kilcruise, Ballyraon-Abbey, St Joseph’s and Portarlington could end up relegated.

The Heath and Kilcruise currently occupy the bottom places but this could change as we progress. 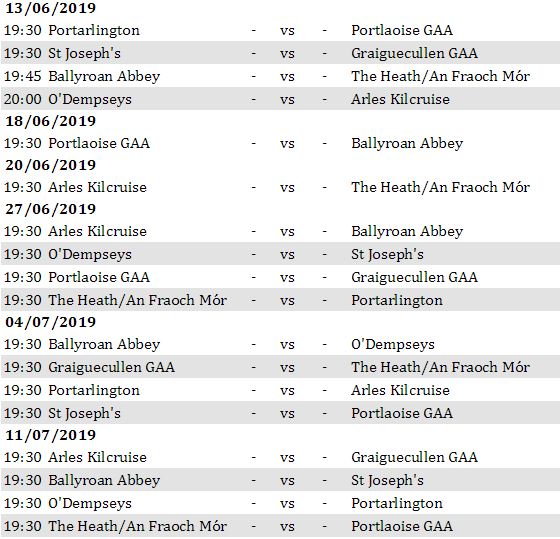 Like in Division 1A, the majority of the teams here have four or five games remaining with only Killeshin left with six.

Ballylinan have set the pace here with nine straight wins and one more over Emo tonight will see them safely through to the final and promoted with three games to go.

Courtwood are in the driving seat to make it back-to-back promotions as two more wins from their remaining matches will see them join Ballylinan in the final – with Emo and Arles-Killeen hoping for slip ups in order to close the gap.

Down at the bottom, St Joseph’s Intermediates look certain to make the drop back to Division 2 with just one win so far while Mountmellick and Killeshin are both in danger of joining them. 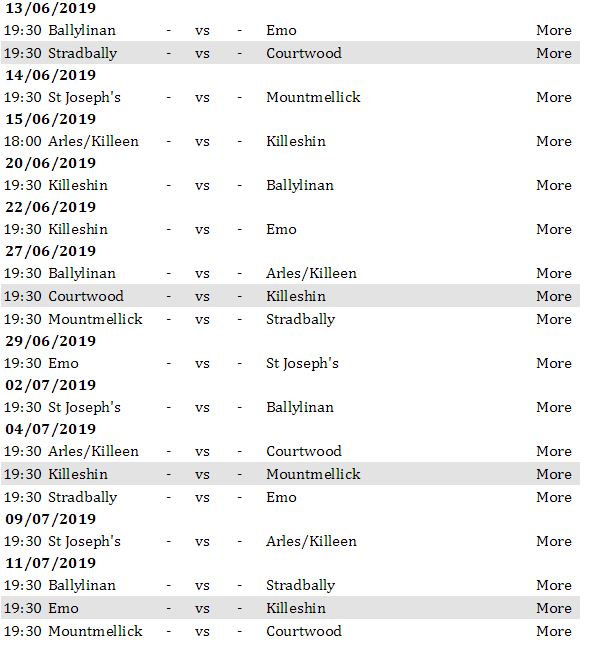 With one or two games remaining for all of the teams in Division 2, the picture is reasonably clear at the bottom.

Graiguecullen’s withdrawal means they are relegated and The Heath will join if they fail to defeat Portlaoise in their next game.

If they win and Annanough lose to Park-Ratheniska, it will set up a showdown between the two on the final round to decide who will be relegated.

At the top of the table, Clonaslee, Portlaoise, Portarlington and Rosenallis are in the mix for the semi final and final places.

If Portlaoise win their remaining two games they will go straight to the final leaving Clonaslee, Portarlington and Rosenallis to battle it out for the semi final spot. 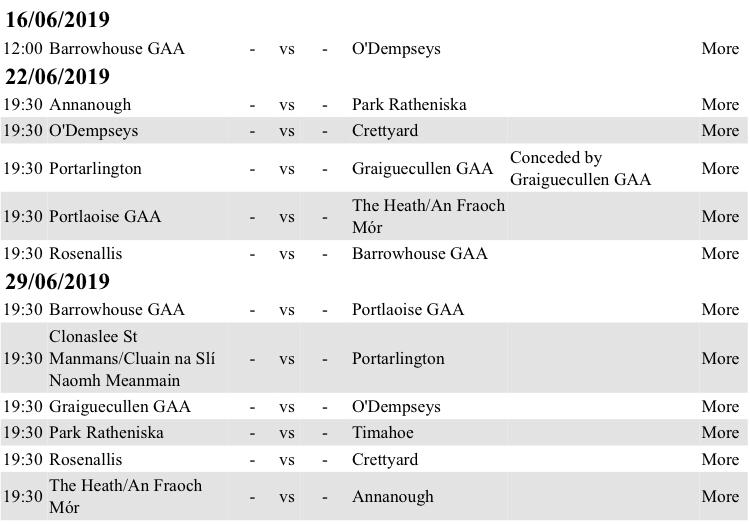 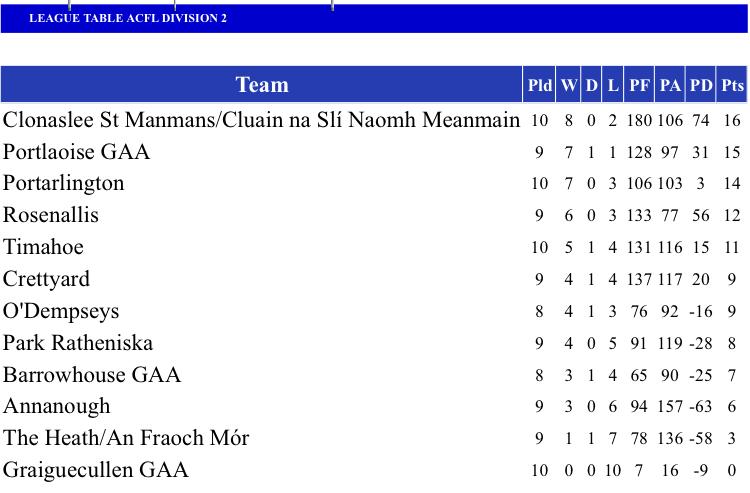 Division 3 have been blighted with walkovers and withdrawals this season.

Ballylinan and Stradbally pulled out of the league after just a couple of rounds while O’Dempsey’s did the same a couple of weeks ago meaning none of the remaining sides can be relegated.

Ballyfin, the division’s only senior team, have won all eight of their games and one more victory will see them guaranteed of a place in the final.

That will leave Ballyroan-Abbey, The Rock and Kilcavan to battle it out for the two semi final spots on offer. 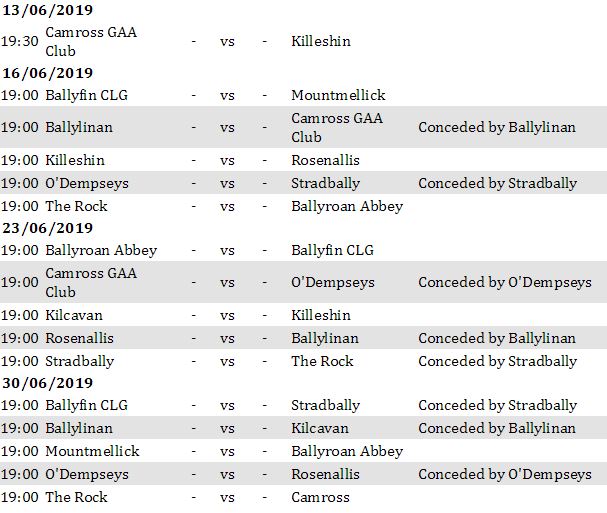 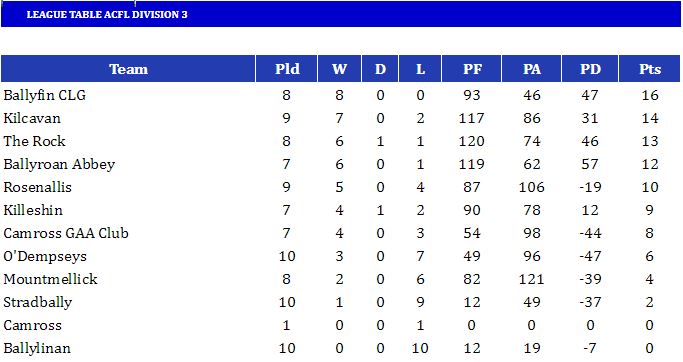 The Division 4 picture is extremely unclear and it is not made any easier to decipher by some seemingly missing results from the website.

Graiguecullen sit top with three games to play and wins in all of those will see them qualify for the final.

After that, Arles-Kilcruise, Spink, Portlaoise, The Rock, Emo and Arles-Killeen could all mathematically fill the two semi final spots.

At the bottom of the table, Timahoe, Annanough and St Joseph’s are all locked on four points with two of them poised to drop into Division 5 pending the remainder of the games. 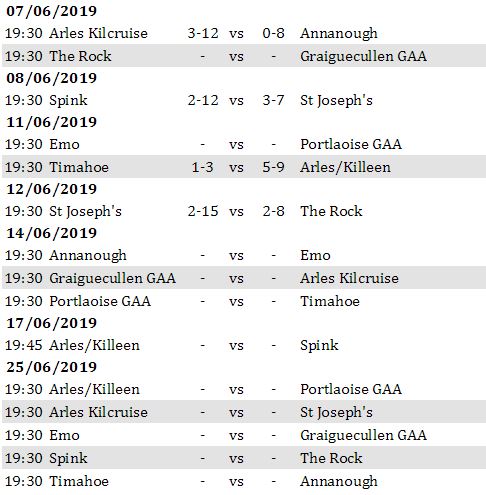 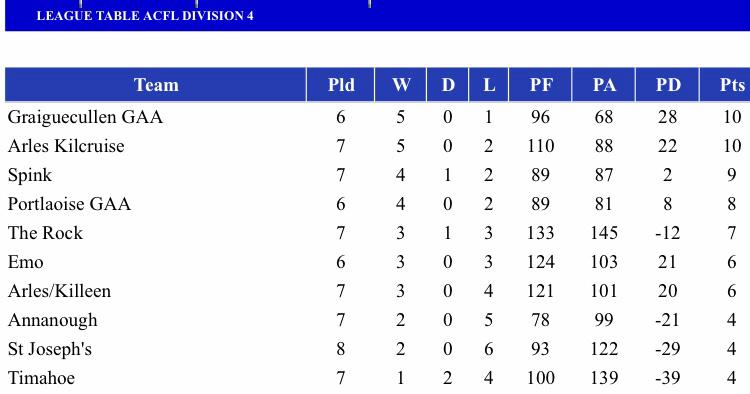 All of the games are completed in Division 5A and Clonaslee have topped the table with The Harps advancing along with them.

The Harps and Ballyfin and level on seven points each and drew when the sides met on May 31.

The Harps have a far superior points difference, but as there were walkovers given by other teams, it was initially thought that a playoff would be required.

However, as both sides received walkovers from Mountrath, this did not effect scoring difference so The Harps progress.

The situation in Division 5B is far simpler. Crettyard finish top and are unbeaten so far so they will play The Harps in the semi final.

Park-Ratheniska finished second ahead of Courtwood and they will take on Clonaslee in the semi final.

SEE ALSO – How Things Stand: Semi finals and finals on the horizon in Laois hurling leagues