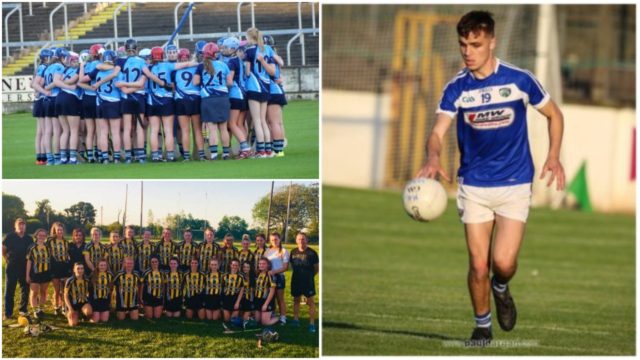 It was a relatively busy night for both club and Laois teams as Laois defeated Kildare in the Leinster U20 championship, the second round of the intermediate camogie championship took place and ACFL matches were decided.

See below for a report on tonight’s game between Camross and St Brigid’s camogie, as well as results of today’s action.

Camross camogie club find themselves on top of the intermediate leaderboard with two wins from two as they held out a three point victory in Errill this evening.

Like the Leinster intercounty football final at the weekend, scores were hard to come by in the opening half.

Unlike the Leinster final, there were unyielding battles throughout the field, with every opportunity clasped to push the sliotar forward through the lines.

Camross opened the scoring through Laois minor and intermediate full-forward Kirsten Keenan, who mastered a sliotar sent in by centre-back Sarah-Anne Fitzgerald to convert the first score of the game.

Great pressure from Tiegan Reilly Bowe forced an error in the Camross full back line and a free was earned and converted by Tara Corrigan, the first of four points for the corner-forward.

The marking between the two Laois minor All-Ireland winners  Clodagh Tynan for St Brigid’s and Keenan for Camross provided pre-eminent viewing as the battle between the two ensued.

Keenan and Sarah Creagh traded points as the home side faced a strong breeze.

Tynan dealt with the dealt in the St Brigid’s full-back line while Sarah-Anne Fitzgerald acted almost like a hoover as she played deep into her back line – cleaning everything up in and around her 21 yard line.

Aisling O’Dea and Corrigan fired over a point from play and a placed ball before Aoife Burke capitalised on a drop in concentration before the break to bring Camross level with St Brigid’s on the cusp of half-time. The half finished four points a piece.

It took all of 30 seconds for Sarah-Anne Fitzgerald to get on the scoreboard in the second half, moving into midfield and winning the ball from the throw-in.

Corrigan’s effort in front of the post five minutes later drew the sides level yet again.

However Camross would see that this is the last time the sides would go level as Sile Burke sent in an excellent ball into her full-forward line, with Sara Cuddy on the end of it to ram the sliotar low into the net to make it 1-6 to Camross.

Following this, Corrgian and Keenan traded frees before Camross subsitute Donnagh Mortimer got the ball out of the ruck and soloed through the St Brigid’s defence, placing the sliotar over the crossbar to give the black and amber 1-7.

St Brigid’s fought back, with Clodagh Tynan the catalyst in launching many attacks into her full forward line. Tynan lobbed over a point of her own around the half-way line before Keenan and Andrea Scully gave Camross 1-9.

Gemma Hoare and Corrigan made it nine points to St Brigid’s, but Camross managed to hold on while the game was in the melting pot to emerge three point victors tonight.

Meanwhile O’Moores saw off The Harps 4-7 to 0-2 in Durrow tonight.

This means that Camross find themselves on top of the table with O’Moores and St Brigid’s joint second and yet to play each other, with The Harps closing up the group.