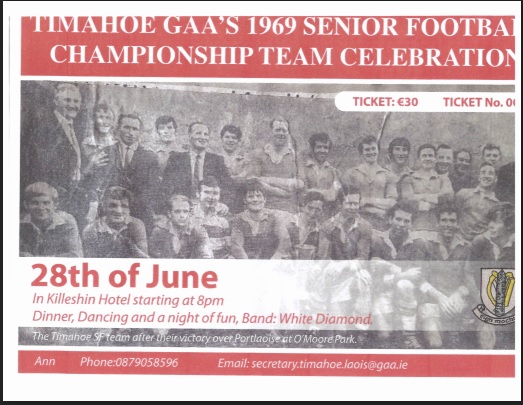 Timahoe GAA club have a very proud tradition – one of supplying quality players to Laois teams and high-ranking GAA officials within the county.

This Friday night they will honour the most famous team in the club’s history – the 1969 senior football championship-winning side.

This year marks the 50th anniversary of that triumph and they are being celebrated at a function in The Killeshin Hotel in Portlaoise this coming Friday night, June 28.

After losses in ’65 and ’68 – to Graiguecullen and Portlaoise respectively – it was a case of third time lucky in ’69, when they beat Portlaoise on a scoreline of 0-12 to 0-9 in the final on October 5.

That win over Portlaoise denied The Town four titles in row and marks a high point in Timahoe’s history.

That team was captained by freetaker Tom Joe Bradley and included Laois players like Mark Delaney at centre-back and Bobby Miller at midfield.

Miller, who won four All Star nominations as a midfielder, later went on to carve out a fine managerial career, managing Laois and Carlow and a host of club teams, including Carlow side Eire Og in the 1990s that reached two All Ireland finals.

He was one of five brothers on that team, including Dick who was Laois GAA chairman from 2000 to 2007.

The event, which gets underway at 8pm, is comprised of “dinner, dancing and a night of fun with music from White Diamond.