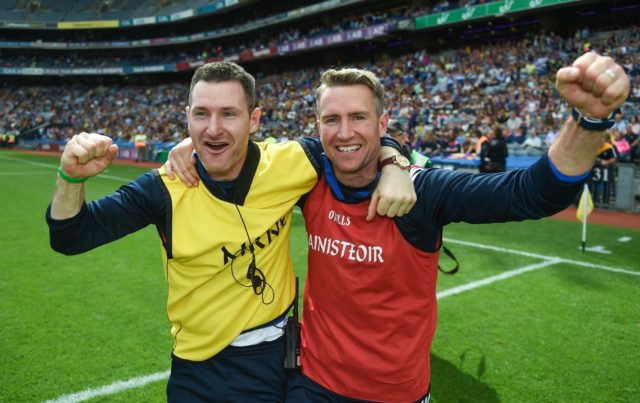 The Laois hurlers enjoyed a comprehensive 3-26 to 1-21 win over Westmeath in the Joe McDonagh Cup final in Croke Park this afternoon.

It completes a remarkable turnaround in the fortunes of Laois hurling under Eddie Brennan as he has taken a side who battled relegation in this competition last season to glory in the space of 12 months.

Mark Kavanagh, in his first game back from injury since the win over Antrim well over a month ago, was the star of the show as he fired over 12 points while Borris-Kilcotton’s Aaron Dunphy chipped in with 1-4 and worked tirelessly throughout as Laois won by 11 points in the end.

Laois will now compete in the Leinster championship in 2020 and will face Dublin next weekend in a Preliminary All-Ireland Qualifier.

Laois are due to have home advantage in that game which will be confirmed early this week. Indeed it will be a busy weekend again for Laois GAA with the footballers in action in their Round 4 Qualifier game.

A one-week break is not ideal but it’s the system that has been in place since the new championship structure was introduced last year.

There was plenty of blue and white to be seen around Croke Park with supporters in high spirits before and after the game.

And for those on Twitter, it was a joyous occasion which was treated as such.

Check out the best of the reaction below:

Immensely proud of the @CLGLaois hurlers today what a terrific performance, speical mention to the captain @PaddyPurcell1 on his outstanding touch to bring Pat Deleney up to lift the cup #absoluteclassgesture #laoisabu #lovelylaois 🔵⚪️

The dream of the double lives on #SamMaguire #LiamMcCarthy #Leix

Only two of the eight teams left in the Liam McCarthy Cup/#GAA Senior Hurling Championship are now unbeaten this Summer; Wexford and Laois 💛💜 💙◻️

Only the big dual counties remain in both All Ireland championships…Galway, Cork, the Dubs…and Laois.
And the under 20s knocking out the all Ireland champs midweek.
Pound for pound the best GAA county in the country at the minute 😉🔵⚪ @CLGLaois #LaoisAbu

Another lack of care by GAA of lower tier competitions.Laois Hurlers win Joe McDonagh and cant even celebrate as they have to play Dublin next weekend… such a farce of an association after putting everything into today and Promotion..no wonder football dont want change

Lovely Laois being sang in Lloyd’s, you just love to see it

Absolutely Brilliant Goal by Aaron Dunphy for Laois in the Joe McDonagh Final. But a Great Run by Picky Maher set it all up 👏👏👏👏 pic.twitter.com/zT1F9b0JR3

@PaddyPurcell1 ,Mark Kavanagh, Ryan Mullaney will surely get All stars for the Joe McDonagh this year for Laois along with Enda Rowland #allstars #JoeMcDonaghCup2019

Not a bad weekend. Offaly bate in the football and the hurlers win the Joe McDonagh Cup – and all that comes with it – in Croker.