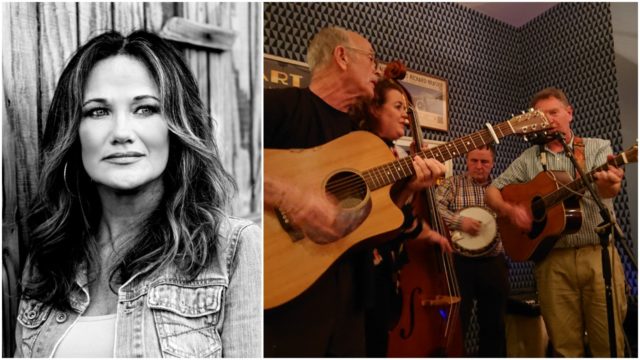 Tony O’ Brien is probably better known to most as a footballer.

That’s perfectly understandable as he was a fairly nifty forward in his day and a handy man at knocking points over the bar. He did after all win five senior titles with St Joseph’s back in the late 70’s and early 80’s.

But these days Ballylinan man O’Brien is better known for knocking out tunes with his bluegrass band, Woodbine.

They are a talented and distinctive musical outfit comprising of Martin Cooney on banjo and fiddle and the versatile Liam Wright on guitar and vocals with Tony’s daughter, Nicola Kennedy on double-bass and a signing voice that can hush any boisterous bar.

Woodbine are the driving force behind one of the most successful musical events in the country each year, the Athy Bluegrass Jamboree.

The Jamboree takes place this year in the Athy GAA Centre on July 12 and 13. The band are known for their unique 3-lead vocals, harmonies and exciting insturmentals.

The Jamboree itself is a follow-on from the long running Athy Bluegrass festival which ran for 25 years before morphing in to the new format, making for 29 years of unbroken bluegrass festivities, so popular with roots and bluegrass fans from all over.

The sporting prowess in the O’ Brien household hasn’t been neglected though as two of Tony’s grandsons, Aaron Cooney and Oisín Hooney, both who kick for Joseph’s, have also impressed for the county. As they say, they didn’t lick it off the ground.

And when Tony is not cheering on Laois or St Joseph’s he is busy rehearsing for Woodbine’s next gig.

The band will of course be centre stage for their many fans at the Athy Jamboree which includes the legendary Alecia Nugent and her band all the way from Hickory Grove, Louisiana; The Watery Hill Boys a regular outfit on the circuit from Drogheda who draw their inspiration from the likes of The Carter Family, The Skillet Lickers, The Blue Sky Boys and Bill Monroe.

Special guests across the weekend will include musical stalwart Gerry Madden on mandolin and Clem O’ Brien on fiddle.

There is just about no one that these two boys haven’t lined on stage with over the years and everyone will remember Gerry from his days with The Flint Hill Boys.

As in previous years you never know who might just drop in for the Jamboree and there are of course the ever popular pickin’ sessions in Pat Dunne’s Lounge Bar.

Tickets for the main shows on Friday and Saturday night in the Athy GAA Centre are €10 and €15 and for bookings or further information you can contact: 085 1656685.

The Athy Bluegrass Jamboree is just one of the many festivals in which Tony O’ Brien and Woodbine will feature across the summer.

They have already put down much talked about performances at the Kilkenny Roots Festival over the May long weekend; they are regulars at the festivals in Ardara Bluegrass Festival in Donegal (July 19-21) and closer to home they always bring the house down in Bob’s Bar in Durrow when they headline at that venue and will perform an open air show again this year at the Scarecrow Festival in Durrow on the Saturday of the August weekend.

Once derided as hillbilly music, bluegrass is enjoying somewhat of a revival and renewed popularity as the sound of political protest across the United States, as recently reported here in The Guardian.