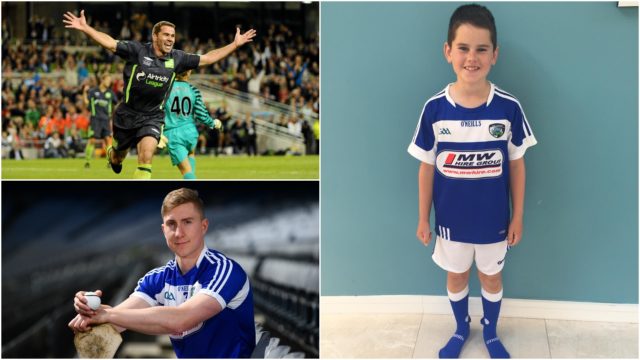 Young Jack Mulcahy, who lives in the heart of Kilkenny, should have no shortage of sporting heroes.

The 10-year-old plays hurling with the famed James Stephens club, home to Brian Cody and a host of Kilkenny stars both past and present.

Even in his own house, his father David is a veteran of the League of Ireland and has played with a string of top soccer clubs in the country over the past 20 years.

Few players have played League of Ireland into their 40s but David Mulcahy has – starting out with Kilkenny City and taking in spells with Bohemians, Cork City and St Patrick’s Athletic among others.

Indeed he holds a special place in Irish soccer history having scored the first ever goal in the new Aviva Stadium – against Manchester Utd no less when he played with an Airtricity League selection in 2010.

But Jack Mulcahy’s sporting hero is Laois hurler Ross King, who he got to know during the winter as Ross and his dad lined out together with Kilkenny soccer side Evergreen, the same club Jack also plays underage with.

Jack’s Laois connections run deep though – his mother Lorna is a Doyle whose roots are in Spink through her mother Bernie Doyle (nee McCormack).

Jack will be shouting for the Laois hurlers against Dublin this afternoon, for whom Ross King will be lining out at corner-forward, a week after scoring a goal in the Joe McDonagh Cup final win over Westmeath.

Laois take on Westmeath in O’Moore Park at 4.15pm.