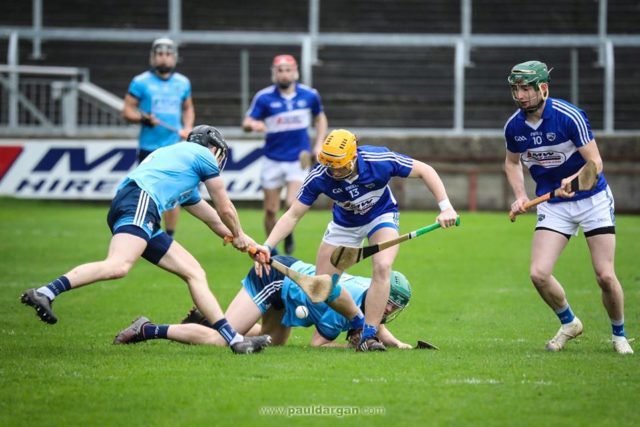 It’s only been a week since the Laois senior hurling team claimed the Joe McDonagh Cup in Croke Park and now they’re out again in another high-profile game – this time it’s the preliminary All-Ireland quarter-final against Dublin.

Here we bring you what you need to know ahead of the game:

Laois play Dublin in the preliminary quarter-final in O’Moore Park on Sunday, July 7 at 4.15pm.

Eddie Brennan makes one change to the starting team which won the Joe McDonagh championship a mere week ago.

One change comes through injury, as corner-back Donnacha Hartnett suffered a broken thumb and underwent surgery for it during the week.

Meanwhile Dublin have made two changes to their team from the one that knocked Galway out of the championship three weeks ago.

They’ll take to the field today without their in-form full-back Eoghan O’Donnell after he picked up an injury against the Tribesmen. Ballyboden St Enda’s James Madden starts in his place with Shane Barrett donning the number three jersey.

Dublin finished third in the Leinster championship this summer.

The Dubs contingent drew dramatically with Wexford, lost to Kilkenny and brought one of the main talking points of the 2019 hurling season as they ended Galway’s All-Ireland campaign.

They only narrowly missed out on a Leinster final place on points difference.

Mattie Kenny took over on a three year term from Pat Gilroy in November 2018. Previously to this, the Galway native enjoyed back to back All-Ireland club titles in 2017 and 2018 with Dublin club Cuala.

Many pundits have been impressed by Dublin’s power and pace this year, in hindsight prehaps underestimating  them at the start of the year.

Chief among this power and pace for the capital are the likes of Chris Crummey, Conal Keaney, David Treacy, Eamon Dillon and corner-back Paddy Smyth.

Dublin do have some high-profile players expected to miss out due to injury. Cian O’Callaghan also nursing a long-term injury.

Laois have played the Dubs twice this year – once in the Walsh Cup and again in division 1B of the league.

On January 6, Eddie Brennan’s men gave a spirited performance against the light blues – losing out by two points in the end, 1-18 to 1-16.

Laois got off to a bad start and were 1-3 to 0-1 down after just five minutes. Indeed Dublin could have had another goal early on only for a good save from Enda Rowland on Dillon.

But Laois settled well after that slow start – and with Donncha Hartnett dropping back to play a sweeper role having started midfield. The sides went level at 1-8 apiece at the break.

In March, a dreary snow-filled day saw Laois take on Mattie Kenny’s side in division 1B.

After a superb display, Laois had their hopes of a second league win taken away in the dying minutes of the game.

Three near goal chances within the first 35 minutes had the Laois fans with their hearts in the mouths as a number of balls dropped in on the full-forward line before being cleared. Laois went down to 14 men and finished on the wrong side of a two-point difference again – although this was a much closer affair.

The man in the middle for this game is Alan Kelly from Galway. The Rahoon/Newcastle man refereed last year’s high-profile Munster championship clash between Waterford and Tipperary, where a ball which hadn’t crossed the white line was awarded as a Tipperary goal.

What other hurling games are on this weekend?

There is one other game in the All-Ireland senior hurling championship this weekend. Joe McDonagh finalists Westmeath take on Cork in Mullingar on Sunday, July 7, at 3pm.

It merits it’s own standing not just as a curtain raiser as Meath face Clare in the All-Ireland senior football championship in O’Moore Park at 2pm.

Extra-time will be played if necessary, the same rule follows in the Laois v Dublin game.

There will be no live stream for the game. Midlands 103 will have full commentary on the radio while our Live Blog will keep you right up to speed also.