There was deep sadness and shock at the end of June with the news that a young Laois mother had passed away in South Africa.

Aged in her early 40s, she is survived by her husband Duane and two young children, Kian (9) and Emma (7), as well as her parents, Jim and Esther, who emigrated to South Africa in 2017 to live near Aisling and her family.

A memorial service for Aisling was held in South Africa on Sunday July 7 and now a second service has been organised in Laois.

The Irish Memorial will take place on Saturday July 20 at 6.30pm in St Peter and Paul’s Church in Portlaoise.

Aisling, who grew up in the Fieldbrook estate in Portlaoise, was a senior lecturer in the University of Cape Town, where she taught gender studies and researched the justice sector on domestic violence against women and children.

She had been living in South Africa for the past 15 years.

She married Duane, who works with the South African Rugby Union, in 2008.

After school in Scoil Chriost Ri in Portlaoise Aisling went to Trinity College Dublin and then Queens University in Belfast.

From there her studies in Ethnic Culture and Resolution took her to South Africa where she spent two days a week in the Shanty Towns.

She returned to Ireland briefly but by then she had met Duane and they married on St Patrick’s Day in 2008 on Kommetjie Beach.

The couple and their young children lived in Fish Hoek, a small holiday town and fishing village off the Southern Cape Peninsula about 40 minutes drive from Cape Town City. Jim and Esther bought a home near Aisling and Duane and spoke about their new life in an interview last year.

Funeral details for Aisling have yet to be confirmed. May Aisling Rest in Peace. 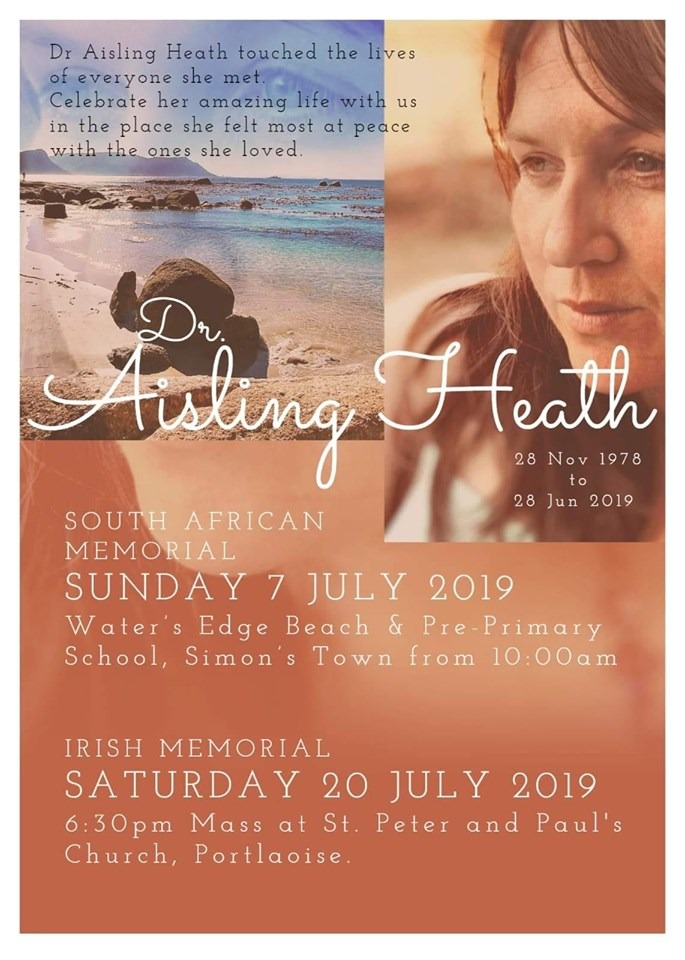