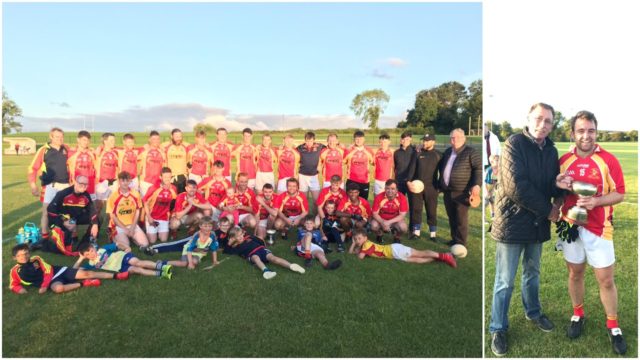 Ciaran Comerford and Podge Delaney were the stars of the show as The Harps defeated Clonaslee to claim the Division 5 football league title in Raheen this evening following a crazy game that saw five goals, four red cards and two missed penalties.

This game between Clonaslee’s second team and The Harps only team saw both miss one penalty each but it was the losers Clonaslee who were on the receiving end of four red cards from referee Mick Tarpey.

All of them came in the final 15 minutes with Conor McEvoy and Tom Horan both going for second yellow card offences while Shay Foynes and sub Enda McEvoy were both shown straight reds.

Comerford and Delaney scored 2-4 between them and were heavily involved in most of The Harps scores as they won by 14 points in the end.

David Doheny and Comerford fired them into the lead early on and although Conor Gorman replied with a free for Clonaslee in the opening ten minutes to narrow the gap, this is as close as they would get all night.

A super point from wing back Padraic Dunne was followed by a brace from Niall Brophy before Delaney and Comerford combined for the latter to slip the ball between Clonaslee keeper Barry Kelly’s legs from close range for the game’s first goal.

Clonaslee replied with a Conor Gorman free but The Harps had the ball in the back of the net again after 20 minutes when Lee Campion forced it across to Podge Delaney who rifled a low shot into the net.

However, Clonaslee were then given a great chance to get back into the game when a foul on Enda McEvoy off the ball was spotted by referee Tarpey who spread his arms for a penalty.

Conor Gorman stepped up to take it but his shot cannoned back off the crossbar where it was cleared to safety.

Ciaran Comerford and Gorman exchanged points before The Harps struck for their third goal on the stroke of half time when Comerford’s pass split the Clonaslee defence and Darren Maher gathered it before rounding Barry Kelly to score.

The Harps led 3-6 to 0-3 at half time and they extended that lead further on the resumption through Comerford and Delaney.

Clonaslee got the next three points though with Tom Horan kicking one before Conor Gorman landed a brace of frees to leave it 3-8 to 0-5 at the midpoint of the half.

Clonaslee were then quickly reduced to 13 players with the loss of Conor McEvoy and Tom Horan in quick succession but initially the numerical disadvantage did not seem to bother them as they went straight down the other end where teenager Bob Downey blasted home a brilliant goal.

However, any sniff of a dramatic comeback was ended seconds later when another teenager, Aaron O’Grady, saw his long range shot deceive Clonaslee keeper Barry Kelly in the sun and drop into the corner of the net for The Harps.

Conor Gorman replied with a free for Clonaslee after 50 minutes but that would prove to be their final score of the game.

Keeper Kelly redeemed himself in the closing moments with a brilliant penalty save to deny Ciaran Comerford after he had been fouled but The Harps finished strongly regardless.

Daniel Comerford, Ciaran Comerford and two more from wing back Padraic Dunne put a nice gloss on the final tally for The Harps as Clonaslee were reduced to 11 players in injury time following the dismissals of Shay Foynes and Enda McEvoy.

The Harps will now look forward to the Junior ‘A’ football championship while Clonaslee will contest the Junior ‘C’.