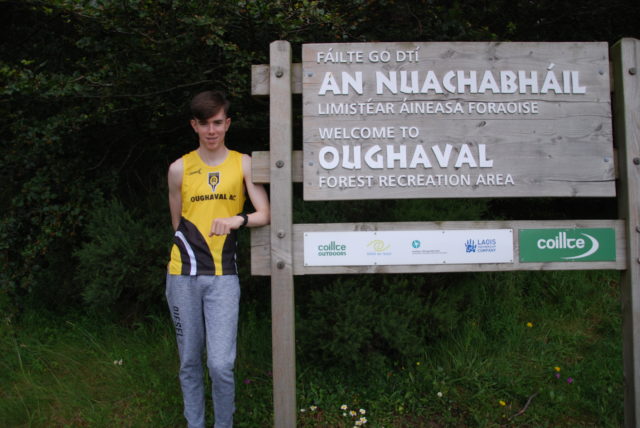 One Laois athlete has made history for his club, Oughaval AC, by being invited to represent Ireland for the Youth National Cup.

Canice Whearty from Vicarstown will be the first Oughaval AC athlete to wear the Ireland singlet in the club’s short history.

Formed in 2012, the ambition of the club was to produce a small number of athletes who could win Laois championships.

Seven years and numerous county, Leinster and All Ireland medals later, Oughaval AC now congratulates Canice on being their first athlete to represent his country.

Canice has always been a leading club athlete. From winning an U-12 county cross country championship in 2013, he has gone on to win Leinster Championship medals at High Jump, Long Jump, 200m and 400m hurdles.

Winning silver in this year’s All Ireland U-18 400m and bronze in 400m hurdles elevated Canice to national prominence and he has been selected for the 4 x 400m relay team for the Youth National Cup.

This is one of two milestones for Oughaval AC in the past week as the club also won their first All Ireland gold medal on Sunday.

Congratulations to Canice on this amazing achievement.

2014 Election Memories: Carnage even before the off, FF and FG power sharing, a...