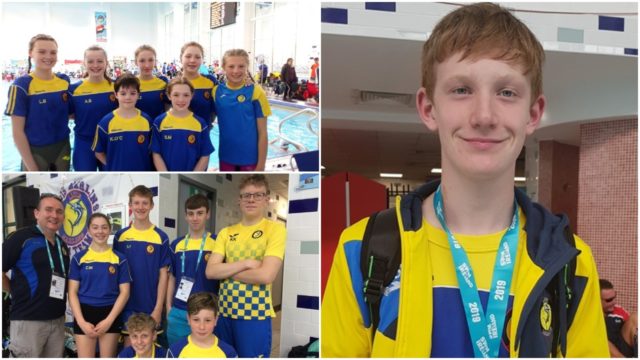 The Irish Age group division two championships is one of the top Swim meets in the Irish calendar for young swimmers.

This Championship takes place in June, at the University of Limerick Sports Campus.

This meet is a level four Short Course Gala, meaning the times achieved here can qualify these young swimmers for the National Short Course championships later this year.

Laois Marlins Swimming Club had a very strong squad of swimmers attending this year, not only did it have the most qualified swimmers of any year so far, but they all achieved qualification with very competitive times.

Of the 19 swimmers who qualified, 17 swimmers took part in the championship, 11 Girls and 6 Boys.

Starting with the girls, Amy Bergin (14) had a super gala, of her seven swims she had five amazing PB’s made four finals, 400m, 100m Butterfly, 100m Breast Stroke and 200m Breast Stroke.

In the breast stroke she took the Bronze medal in a very tough race, the 400m Individual Medley.

Lucy Brennan (14) had a total of 10 swims, she achieved eight super PB’s and made three finals, finishing just outside the medals in the 100m Breast Stroke, 200m Breast Stroke and 800m Freestyle.

Orla Colley, just 12 years old, made her first appearance at the IAG’s she had 1 swim the 100 Back Stroke, she gave a super performance to finish with a strong PB.

Sophie Igoe, just 11 years old, made her debut at the IAG’s she had one swim the 50m Freestyle, she gave a great performance staying very close to her Personal Best.

Lena Kaminska (12) also made her IAG debut, she had four swims, she had two super PB’s in the 100m and 200m Back Stroke, making the final in the 100m back stroke and finishing in eighth place.

Caoimhe Moore, had eight swims, she had three Personal Bests, made three finals, finishing with a massive PB of over 6 seconds in 400IM to finish in sixth place, while also finishing in eighth place in 100 Fly.

Sadhbh Moore, just 12 years old, had one swim the 50m Free, she gave a super performance staying very close to her PB.

Daniela Ryan (14) had one swim 200m Back Stroke and she gave a super performance achieving a new PB.

Jessica Zhigulskaya (14) also made her IAG debut, she had two swims 100m Free and 200m Back Stroke, she achieved a super PB in 200m Back.

For the boys, Sean Donoghue was in great form, he had four swims, made one final and achieved three PB’s with super PB’s in the 200m Breast Stroke and 400m IM for which he took the Bronze Medal.

Sam Farrell 14, made his debut at the competition, and he did it in style.

Sam had five swims, he achieved four PB’s, he reached two finals, the 100m & 200m Back Stroke. Sam took Gold in the 100m Back and Silver in the 200m Back, achieving Division 1 times in both swims in the process.

Kuba Krawczun was also in top form. He had seven swims, achieved a whopping seven PB’s , reached five finals, taking the Gold Medal in 100m Free, achieving a Division 1 time in the process.

Kuba also took the bronze medal in the 200m Individual Medley again achieving a Division 1 time, while finishing just outside the medals in the 400m Free and 200m Free.

Cian Nugent had one swim, the 100m Free, he gave a super performance achieving a Personal Best.

Ignat Samuchov, just 11 years old and the youngest of the boys competing for Laois Marlins, had a busy season and qualified in six swims. Ignat gave strong performances throughout the competition, achieving PB’s in 50mFree, 100m Back and 200m Individual Medley.

Last but by no means least, Valera Zaharovs who had two swims, 100m and 200m Back Stroke, Valera achieved super PB’s in both swims and made the final in the 100m back stroke, in which he finished in 9th Position.

This was a hugely successful year for Laois Marlins at the Irish Age Groups Division 2 Championships, the club is now looking forward to a successful winter season ahead.