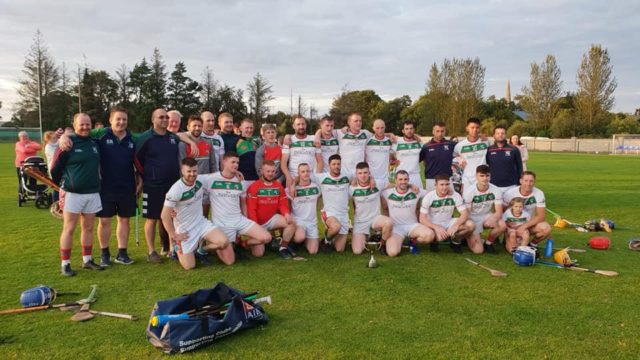 In what was a keenly contested game, the winners showed a greater hunger to win by eight points.

The winners were hungrier through out.  The lead changed several times in the first half but the losers were giving away too many frees from which Thep Fitzpatrick reaped the benefits.

Damien Bergin and Brendan McEvoy were doing trojan work keeping their team in it till halftime.

At back Alan Delaney played solidly for the winners as did Vinny Cleere and Kevin O’Dea.

Shane Dollard controlled midfield, Eoin Burke did a good job under breaking ball. But it was Thep Fitzpatrick who stood out from everyone with his man of the match performance.

For Cough/Ballacolla Eoin Doyle, Brendan McEvoy held it together.

Damien Bergin gave another good display and kept his team in it for most of the match.

Both sides will now turn their attention back to the intermediate championship next week with Rathdowney-Errill to meet Clonad in the losers section and Clough-Ballacolla to meet Borris-Kilcotton on the winners side of the draw.