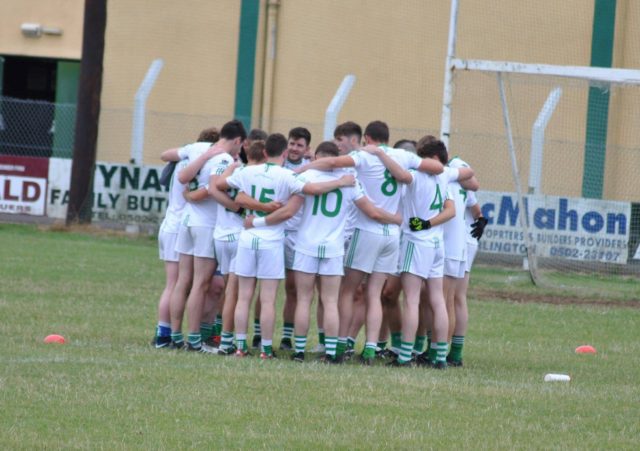 It felt like somewhat like a drawn-out display in McCann Park tonight but Rosenallis eventually emerged over the line against competitors Annanough in this opening round battle.

Annanough only gathered two scores in the opening half – but those two scores were goals which came at crucial times before Rosenallis could begin to build up too much of a lead on last year’s junior champions.

Rosenallis could have led by more at the break – however eight wides in the opening 30 minutes meant they led by just seven at the break, despite having much of the possession in that time.

Captain Ruaidhrí C Fennell was the catalyst in Rosenallis’s next attack, his block on Damine McCaul resulting in the ball finding its way down to Ronan Murray, who converted a free on the 21 yard line.

Eoin Dunne’s U20 intercounty experience certainly showed, as he picked off three points without reply, including a signature 45’ off the ground, to give Rosenallis five points to no score.

Annanough got the boost they needed in the 11th minute, as Damien McCaul used his speed to cut through the Rosenallis defence and find Jamie Fenlon in the square, who lodged the ball in the back of the net and bring it back to a two point game.

Rosenallis replied, once again, through Dunne, as he sailed over a 21 yard free to loosen the gap back to a goal between the sides.

Paddy Dunne’s side failed to convert two consecutive placed balls, before Jack Conroy cut through the noise to bring their tally to seven points after 19 minutes.

Four minutes passed until the next addition to the scoreboard, which saw Mark Dunne gather his second as Donnagh Callaly popped the ball outside to his wing forward.

Eoin Dunne slotted over his fifth point from 40 yards out, making it 0-9 to Rosenallis.

It was now 17 minutes since Annanough’s last score, but veteran Colin Miller took the opportunity he was given to rattle the net as he collected a Cathal Connaughton free and put Rosenallis’s lead back to just three points.

However just as one goal came a floodgate of sorts opened. Donnagh Callaly replicated raising the three flag at the opposing end while Dunne’s free on the stroke of half time left it Rosenallis 1-10 Annanough 2-0 at the break.

McCaul got Annanough out of the blocks first on the resumption of play, scoring their first point of the game.

Eoin Dunne glided over his fifth effort from placed balls while Annanough goalkeeper dealt with the threat of goal, keeping out a palmed effort from Conroy.

Mark Dunne’s point on the cusp of the 40th minute was met with a reply from Marty Stapleton who swept through the Rosenallis half-back line to get his name on the board.

A long-range free from McCaul’s right boot followed, and only six points remained between the sides.

John Lennon and Ronan Murray combined forces for Murray’s second point of the evening. The next play saw Lennon send the ball long into Brian Fitzpatrick, who found Mark Dunne to make it 1-14 after 50 minutes.

It was Donnagh Callaly who was on the end of Rosenallis’s second goal, with great work being done out the field by his brother Cillian setting up the young man for his shot at the net.

A scramble over the line saw the seasoned  Colin Miller grab Annanough their third in a hattrick of goals after 55 minutes.

Rosenallis’s win tonight means they will play The Rock in the second round, while Annanough face St Joseph’s.