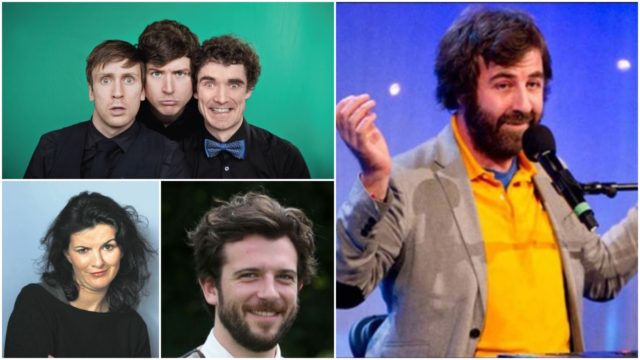 Nestled a quiet corner of Electric Picnic, away from the hustle, bustle and music, there is one sound you are sure to hear all day – laughter.

The very best of Irish and international comedians will gather together to provide mirth and merriment for weary Picnickers. With a full day to night line-up there is a comedian to tickle everyone’s funny bone. Make sure you don’t miss it!

It’s been quite the year for comedy sketch troupe, Foil Arms and Hog, with 12 sold out shows at the iconic Vicar St. venue and countless packed houses around the country.

Their recent Galway Arts Festival show caused traffic chaos on the streets, such was the size of the queues .

The trio (Sean Finegan, Conor McKenna and Sean Flanagan) write, shoot and edit a new sketch every week in their office releasing it on Facebook and You Tube. Often observational and occasionally topical, the sketches have amassed over 100 million views on YouTube.

The undisputed King Of Stradbally, David O’Doherty make another welcome return to Electric Picnic with a brand new show consisting of talking and singing whilst playing on a crappy keyboard from 1986.

As seen on BBC Two’s ‘Live at The Apollo‘ and Channel 4’s ‘8 Out of 10 Cats Does Countdown’, the self-confessed ‘Hairy Enya’ will try to fix everything that is wrong in the world and once again he will fail!

Scotland’s Daniel Sloss has an unapologetic approach which has helped him connect with audiences since the tender age of 17 when he first took to the stage as a stand-up comedian.

Sloss has become an international star, helped along by two Netflix specials (Dark and Jigsaw), which has led to him playing sold out shows in every corner of the globe. Devastatingly intelligent and deliciously dark, he is sure to be a festival highlight.

It’s hard to think of any other comic who matches Jason Byrne for ebullient energy and regulated chaos. Full on doubled-up gasping for oxygen hilarious, it’s no wonder he is widely regarded as the outright King Of Live Comedy.

Using his trademark blend of audience interaction and razor sharp improvisation, Abandoman will take you on a musical journey, transforming the audience’s likes, loathes and daydreams into hit songs and captivating tales.

Star of TV shows such as Death In Paradise (BBC) Father Ted (CH4), Ardal O’Hanlon, continues to tour his acclaimed stand-up worldwide because he loves it and it’s a compulsion and the world is a funny place. A brilliant comic mind, that works away to get the most out of every superbly sharp line.

Comedy dynamo, Deirdre O’Kane, can do it all although we’re not sure where she gets the time – from tango to ballroom, bringing-up kids and making TV she is fast becoming the nation’s sweetheart. Her instantly charismatic style, presence and brand of day-to day anarchism dazzles audiences from start to finish.

Fred Cooke is leaving his twinkle toes behind him following his success on Dancing With The Stars and is ready to unleash his new comical brand of musical madness. Cooke’s guitar plucking panache enables him to paint comical situations, before delivering unexpected killer punchlines that leave the audiences rolling with laughter in the aisles.

There is something incredibly watchable about Yorkshire comedian Maisie Adam, whether it’s her onstage effervescence or her fantastic physicality.

Inevitably she‘ll be compared to a young female Peter Kay except her jokes and performance are far more eccentric! Picnickers will love her!

Star of Bridget and Eamon (RTÉ Two), Bernard O’Shea’s comedy is a heady mix of autobiographical, anecdotal, obsessional and absurdist riffs, married to the kind of luxuriant angst, glorious vulnerabilities and fabulous impromptu raging that reminds you how extraordinary stand-up can be.

Paul Currie’s beautifully daft shows are comedy in its purest form. A frenzy of silliness and joy coupled with an at times perfectly pitched melancholy that serves only to make the laughter louder. He is unlike anything else you are ever likely to see over the weekend.

With his videos, Tony Cantwell has generated over 4 million views online and amassed quite a cult following thanks to his oddball alter egos Ploon, Your Ma’s Mate, and the Dublin Frenchman as well as hundreds more created through his Instagram stories. One of the country’s most exciting comics, his unconventional take on comedy belongs on the Adult Swim network.

Award winning Geordie comic Kai Humphries has a refreshingly unique and fascinating view of the world shaped by his exciting and colourful experiences. There are no messages, just a natural comedian telling stories and garnering laughs.

This year no less than ten of the most exciting and freshest comics will be making their Picnic debuts, so look out for strong sets from Ger Staunton, Shane Clifford, Conor Drumm, Anna Clifford, Paul Marsh, Mark O’Keefe, Aoife Dooley, Naomi Cooper, Ryan Cullen, Colin Chadwick and internet star, Bernard Casey. All this under the tutelage of your MC for the weekend loveable Limerick scamp Karl Spain.

The comedy tent takes place on Sat August 31 and Sunday September 1 and kicks off at 1.15pm each day.