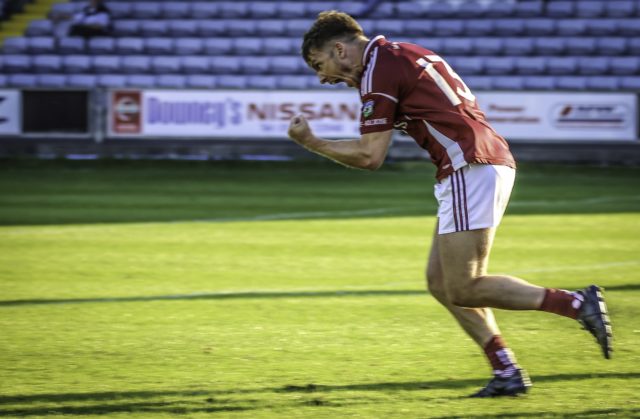 Parish neighbours Ballylinan and Arles-Kilcruise were both in championship last-chance saloon – and they served up a hugely dramatic encounter in O’Moore Park this afternoon.

Arles-Kilcruise looked dead and buried when they trailed by six points midway through the second half and they were still three down in injury time.

But not for the first time they showed their battling spirit and a Ross Munnelly penalty with the very last kick of the game and in the 69th minute meant it finished level.

Arles-Kilcruise got off to a dream start with Ross Munnelly palming to the net from close range after three minutes after a pass across the square from Chris Conway.

Munnelly was on top form in the opening half as he hit 1-5, all but one point of it from play.

His goal put them into an early four-point lead but Ballylinan got up and running eventually and Seamus Lacey struck for their first goal when he bravely punched to the net after a pass from Alan Farrell.

Arles responded well to that goal, however, and three of the next four points (from Munnelly, Chris Conway and Caomhan Brennan) had them 1-5 to 1-2 up after 15 minutes. Ballylinan’s score in between was a second point for Andy McEvoy.

But Robbie Donoher and Cathail Dunne pointed to bring the gap back to one before McEvoy tucked away a lovely goal to put Ballylinan into the lead for the first time.

Again Arles responded well – with Munnelly and David Conway pointing from play to level things up.

But Ciaran Farrell put Ballylinan back into the lead and then Dunne struck for their third goal when he won a long ball from Alan Farrell and finished smartly from close range.

Munnelly hit back with another point and at half time Ballylinan led 3-5 to 1-8.

The second half was a non-event for the most part with points from Ciaran Farrell, Alan Farrell and a Cathail Dunne ’45 putting Ballylinan six ahead.

But it burst into life in crazy fashion.

Kilcruise kept plugging away and hit four points in a row – from Munnelly, David Conway, Kevin Meaney and PJ Lawlor – to close the gap to two as the game entered injury time.

But Ballylinan seemed to weather the storm and a late Larry Kealy point to make it safe.

A shemozzle of sorts broke out after that with Kevin Meaney and Jamie Farrell picking up second yellow cards and their marching orders.

And that was only the start of the drama. Ballylinan picked up two more black cards through Alan Farrell and Robbie Donoher and Arles-Kilcruise were awarded a controversial late penalty when they blocked a Ross Munnelly free on goal.

By now we were nine minutes into injury time (three was initially signalled) but Munnelly duly held his nerve to bury the penalty and the final whistle blew straight after.

A replay during the week will be needed to separate them.