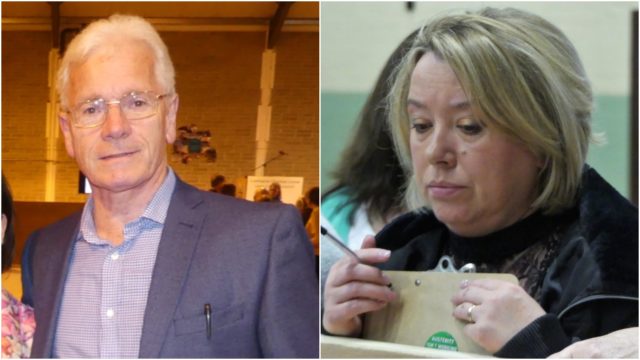 There was a right good verbal spat at the Council over the make-up of the local authority Special Policy Committees (SPCs) for the next five years.

The scrap at the Council meeting kicked-off when Sinn Féin accused the ruling Fine Gael-Fianna Fáil axis of being unfair and inequitable in the share out of places on the SPCs.

However, in an exchange which got quite heated by times they were told in no uncertain terms where to take that proposal.

If they wanted legal advice they could source it themselves was the response.

For their part the Fine Gael/Fianna Fáil side of the house, which has de facto coalesced, to control the Council and its subsidiary bodies were astonished and outraged that Sinn Féin should try to introduce this fly in the ointment.

They insisted that everything was in order, all was above board and that it was properly decided and agreed at the AGM of the new Council back at the start of June.

The row erupted when a report came before the councillors for their approval to agree the structures, make-up and formation of the new SPCs to span the lifetime of this Council from 2019 to 2024.

The senior Council officials and management who went to great pains to stay out of it and keep the issue at arm’s length were even caught in the cross-fire.

Pressed on the issue by Sinn Fein, the CEO John Mulholland was insistent that it was exclusively a function of the elected members, decided at the June meeting by the grouping system and a matter in which he and his officials had no role.

At issue was not the composition or functions of the SPCs, but rather who would be the chair and vice-chair of the special committees.

This has been divvied up by Fine Gael and Fianna Fáil by dint of the numbers they had elected in the May local elections, to the exclusion of Sinn Féin, Labour and other independent members of the Council.

“We have been totally excluded. It’s not equitable and we are being treated unfairly,” charged Cllr Aidan Mullins who was adamant that the Council management had a function under the requisite legislation to ensure that this doesn’t happen.

He urged them to seek legal advice. His proposal seconded by his colleague Cllr Dwane.

“We want this clarified. Implement the legislation or remove it. Otherwise it’s a farce and a lie,” contended Cllr Dwane-Stanley.

Cllr James Kelly said it would be good to have clarity.

The CEO Mr Mulholland said he couldn’t possibly comment. These were political appointments, removed from the executive, confirmed and agreed at the AGM after they were formally proposed and seconded.

Cllr Mullins accused Fine Gael and Fianna Fáil of “hogging positions” and based on the equity, balance and fairness as set out in the relevant local government Act he wanted the officials to seek legal advice.

Fine Gael and Fianna Fáil members were aghast at the accusations and clearly irritated.

The chairman, Cllr Willie Aird, reminded Sinn Féin that the positions were determined by a democratic process and duly voted on, that’s how the grouping system works, he said.

The AGM was perfectly legal, Cllr John Joe Fennelly was certain and the make-up was decided on the basis of representation.

At the AGM it was decided that the Chairs of the four SPCs would be councillors John King, Conor Bergin, Thomasina Connell and Paddy Bracken.

Director of Services, Donal Brennan said that it was up to the Council AGM to decide on the chair and vice-chair positions and that the remainder of the SPC composition was conducted through consultation. All 19 councillors would be members of one of the SPCs he pointed out.

As regards seeking legal opinion, Cllr Thomasina Connell suggested that if the two Sinn Féin councillors wanted a legal opinion it was open to them to get their own.

That didn’t help calm things down.

“I’m not asking to re-write the Constitution or anything. What would it cost to simply get a legal opinion on the legislation, that’s all,” replied Cllr Mullins.

Chairman Aird insisted that the grouping system was activated and properly conducted at the AGM and just because some people are not satisfied doesn’t mean that it wasn’t right.

“The AGM was legal and one hundred per cent above board and I counter propose,” intervened Cllr Catherine Fitzgerald.

“It wouldn’t cost much to get a second opinion and have a solicitor look at it,” suggested Cllr Noel Tuohy.

Cllr Mullins wasn’t for turning. He believed the Council had a duty to ensure that all sides of the political equation were treated fairly. He contended that the CEO was “side stepping” the issue.

But CEO John Mulholland refuted this out of hand. He observed that a great deal of time had elapsed since the decisions in dispute were first made; why these concerns were not raised back then?

On the substantive issue, they were decided on the basis of a proposer and seconder and were agreed under the grouping system at the AGM. Regarding him seeking legal opinion, that would be addressed if he was requested and directed so by the Council.

Cllr Aird said that the grouping system at the AGM was applied the same as it had been for years. He was putting the Sinn Fein proposal to a vote. SF insisted on a roll call rather than just a show of hands.

“14 to 5. That’s the end of that,” announced Chairman Aird emphatically, and the Sinn Féin proposal was obviously lost.

The Council will now move to form four Strategic Policy Committees under the categorisation of Housing, Regeneration and Planning; Climate Action and Community; Transport, Environment and Emergency Services and Enterprise, Economic Development and Tourism.

Other than councillors membership will be drawn from other sectoral interests as follows: agriculture and farming (3), environment and conservation (3), development and construction (3), trade unions (2), community and voluntary (2) and social inclusion (2).

SEE ALSO – Moment in Time: Sun shines down on Abbeyleix for their 2004 Fete