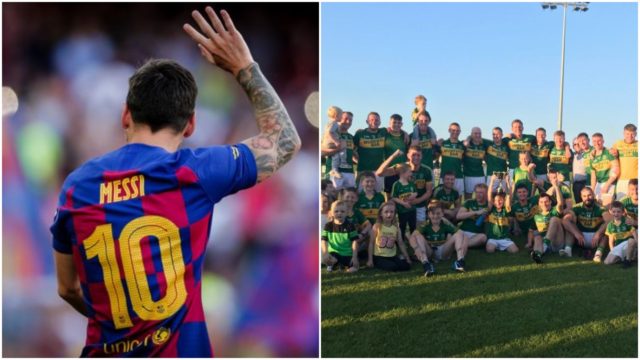 James ‘Messi’ Redmond was Ballylinan’s hero as his late goal saw them defeat Arles-Kilcruise in a dramatic SFC Round 2 replay game this evening.

Ballylinan had to play for the whole of the second half with 14 men after Ciaran Farrell was shown a straight red card just before half time.

It looked like Kilcruise were going to claim the win when they drew level with five minutes to go but Redmond’s late goal was the difference.

There were also fine displays from Cathail Dunne and John Kealy for Ballylinan too who will face Courtwood in Round 3 next week.

Ballylinan made a dream start as with less than 30 seconds played, veteran John Kealy floated a lovely ball in to Cathail Dunne who latched onto it and stroked it past the advancing Ciaran Lawlor.

We had to wait ten more minutes for the next score which came via Andy McEvoy before Kilcruise opened their account via Conway brothers Chris and David.

Alan Farrell kicked Ballylinan’s final point of the opening half after 14 minutes as their neighbours Arles-Kilcruise completely took over.

They had two goal chances with Cialann Mulhall hitting the side-netting and Chris Conway forcing a great save from Tom Wright but they would draw level by half time.

Chris Conway, Ross Munnelly and Stephen Miller all raised a white flag before Ballylinan were reduced to 14 men in the third minute of first half injury time.

Ciaran Farrell struck David Conway off the ball and, following consultation with linesman Des Cooney, referee Brendan McCann brandished a red card. The half time whistle sounded soon after and the sides went in level 1-2 to 0-5.

Just as in the first half, Cathail Dunne made a scoring start to the second as he slotted over a long range free from just outside the 45 to end Ballylinan’s scoring drought.

Dunne added another to leave two between them and then slotted his third of the game to push Ballylinan 1-5 to 0-5 ahead after 37 minutes.

Kilcruise went 16 minutes without scoring and after a few wides, David Conway finally opened their second half account with his second of the evening.

Ballylinan were struggling to get out of their own half and Ross Munnelly’s second of the evening cut the gap to one with eight minutes of normal time to play.

Munnelly repeated the trick three minutes later but Ballylinan struck for their second goal after 57 minutes.

Jamie Farrell’s shot for a point came back off the upright and the ball came down to Cathail Dunne who forced it down to James ‘Messi’ Redmond and he slipped a shot through Ciaran Lawlor’s legs.

Kilcruise went in search of goals and they had a late opportunity but Colm Munnelly’s half volley struck the post while a Ross Munnelly free was all they could muster and they will now face Crettyard in the relegation semi final.

Ballylinan made the game safe with the final kick as Cathail Dunne took his tally to 1-4 to seal a priceless win.