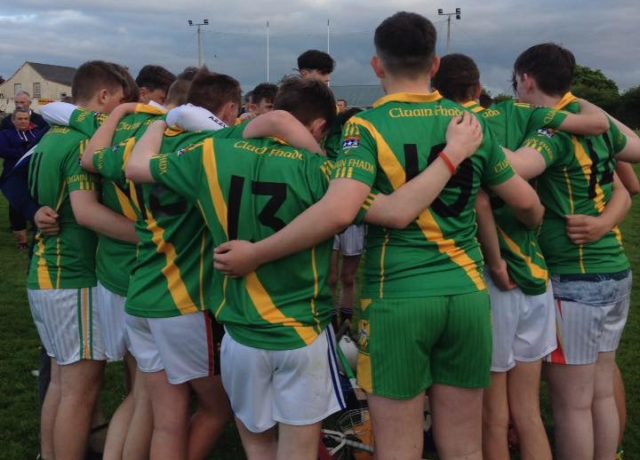 It will be Ballypickas who will be playing Junior hurling next year after Clonad romped to an impressive victory over the latter.

Fionn Holland and Ray Killeen both played superbly with both notching 1-3 in the match.

The game started with both sides looking edgy. An MJ Lalor free was matched by a point from PJ Daly.

MJ Lalor got his second of the game before Fionn Holland and Ray Killeen pointed for their side.

Daire McWey got a point from play and MJ Lalor got his third of the game with a superb long-range effort.

Sean Egan left two defenders in his wake before unleashing a shot into the net to settle his side down.

The goal gave Clonad a lift and John Noonan and Killeen fired over to give them a four-point lead.

MJ Lalor replied with a free before Holland got his third of the game.

Good hassling from Paul Ging allowed him to win possession and raise a white flag.

Clonad went into the break with a five-point lead.

Liam Lalor and MJ Lalor both scored from play as Ballypickas started the second-half just like the first.

Clonad’s forwards were on their game and Fionn Holland rattled the ball beyond Sean O’Dea in the Ballypickas’ goal.

Killeen and MJ Lalor traded points before Clonad got in for their third goal.

After a scrappy piece of play, John Burke was on hand to drive the ball along the ground to raise their third green flag.

MJ Lalor tapped over another free. Daly and Adam Holland tacked more points on to the scoreboard for Clonad.

Paddy Boggin fired over before Clonad got in for their fourth goal of the game.

Killeen took his tally to 1-3 after a fine run was capped off with a goal.

Ballypickas ended the game with 14 men as Ciaran Bowe received his marching orders for an off the ball incident.

For Ballypickas it’s a drop down to Junior hurling which they’ll be disappointed with after such fine performances in the earlier rounds.